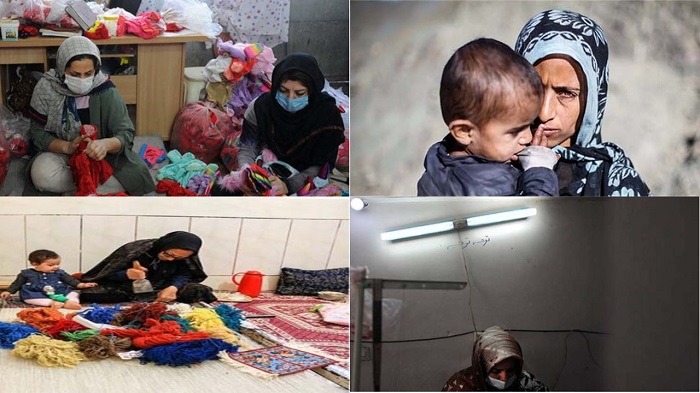 The National Council of Resistance of Iran (NCRI) Women’s Committee reported that the number of women in the household has risen to 4 million over the last 10 years. These women are now being cared for by more than 15 million people. The regime still tries to demonstrate support for these women who are in need by referring to initiatives such as women leaders’ empowerment. But poor standards of living and empty tables are one of the most visible indicators of shortfalls in this respect for women heads of households.

Many numerous amendments, orders, and proposals on women heads of household in every country have been mention, yet, all of the resolutions evidently don’t apply in the real world. Massoumeh Ebtekar, Rouhani’s Deputy for Women’s and Family Affairs, did little for women except using the word ’empowerment of women household leaders.’

On 10 April, in an interview with the Jam-e Jam Daily, Mousavi Chelek, President of the Association of Aids Workers have said there is no support for “empowerment” of women household leaders, talking about women’s empowerment initiative. He called the initiative insignificant and said that this collective is not empowered, employed, or independent. The social distress expert Jafar Bai called the plan “a deceptive bubble,” admitting that the “foundational vision and infrastructure in this field” had never been met.

“As this trend continues, the government will always have a large population of women heads of households,” Chelek added. “These numbers will trend upwards as it becomes more difficult to earn a livelihood and as the Coronavirus spreads.”

According to state-run business Jam-e Jam Daily, on 10 April, just a very limited number of women heads of household were compensated by the government. It is notable that there is a lower level of pension under the legislation.

The oppressive regime of the mullahs abuses even their own minimum wage laws to further pillage and to give the ruling regime full benefit.

The workers’ living funds were set at 4.940 thousand tomans last year when they reviewed the Persian minimum wage of 1399. There was certainly a higher cost of living” according to the Tasnim News Agency, on 28 December 2020.

Female workers’ salaries were still much smaller than men’s and they were systematically subjected to double discrimination again. In the meantime, 10 million Tomans are on the poverty line for a family of four.

One of the areas of discrimination against women heads of the household in the Persian year 1400 is non-paid fees on the grounds of their gender. Every married child employee is paid 600,000 tomans by the government, but women receive no payment from the government. This is while women and men pay the same insurance fee for their employment.

A retired working woman and a single breadwinner spoke about her pension and bare tables of household heads:

“I retired in 2019 at the age of 42 with 20 years of experience. In the most optimistic case, this pension covers 10 days’ worth of expenses for my family and me, or it just pays the rent.”