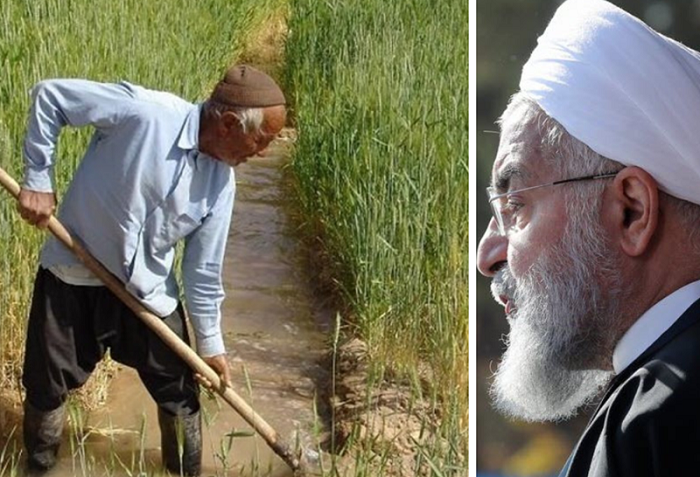 With less than a month until Iran’s presidential election on 18 June, critics of President Hassan Rouhani expose alarming data regarding the administration’s disastrous eight-year competence.

Sepehr daily, which is connected with Supreme Leader Ali Khamenei’s group, slammed Rouhani’s administration for its failings in the agriculture sector on 22 May. “In the agricultural sector, the Rouhani administration made three mistakes that resulted in market chaos and the loss of national resources,” Sepehr wrote. “It will be a major task for the next administration to re-establish farmers’ trust.”

Agricultural products had the worst market in decades due to poor process control infrastructure, incorrect financial-exchange policies, complete reliance on Iran’s 2015 nuclear deal with major world powers, and a lack of export destinations.

Rouhani halted the abstraction law during his presidency, which, despite its name, concentrated on marketing tasks and responsibilities in the Agriculture Jihad Ministry. The market became substantially more chaotic and unstable as a result of the suspension. According to the law, the ministry was responsible for all aspects of the production chain, which helped to improve farmer circumstances and balance the market.

Indeed, Rouhani put the bill on hold for two years when the Majlis (Parliament) objected to the establishment of the Trade Ministry. In this context, neither the Ministry of Industry, Mine, and Trade nor the Ministry of Agriculture Jihad acknowledged the responsibilities of the production chain.

Rouhani effectively blamed the Majlis’ inability to establish the Trade Ministry for the country’s economic woes, which include market turbulence and inflation rates above 40%.

When feed became limited, these importers sold their cargoes for five times the original price, resulting in an exponential increase in the price of protein goods on the market. This is despite the fact that livestock farmers must spend 70% of their income on feed.

Farmers and orchardists also face plenty of challenges, including high seed prices, water scarcity, and a lack of government support. Farmers’ costs are significantly higher than their earnings in this regard.

“Here, farmers have produced a large amount of onion, but there is no market for it. Farmers must leave their products or stockpile in warehouses to rot because the government does not export,” said a farmer from the south-eastern province of Kerman.

“Recently, the Rural Cooperative Organization paid 6,000 rials [$0.26] per kilo of onion. Farmers’ harvesting costs are not covered by this price,” he added.

According to the head of the grocers’ union, there are roughly 250,000 tonnes of apple and orange in Tehran’s depots and cold storages. He went on to say, “These fruits are on the verge of decay.” The government, on the other hand, neither distributes them to poor people who haven’t eaten fruits in months nor exports them for profit.

Farmers have been selling their goods ten times lower than the market value. They were forced to leave their products due to inflated costs, and there are countless reports circulating on social media of tonnes of onion, tomato, potato, apple, orange, and watermelon left alongside roads or in dumps.