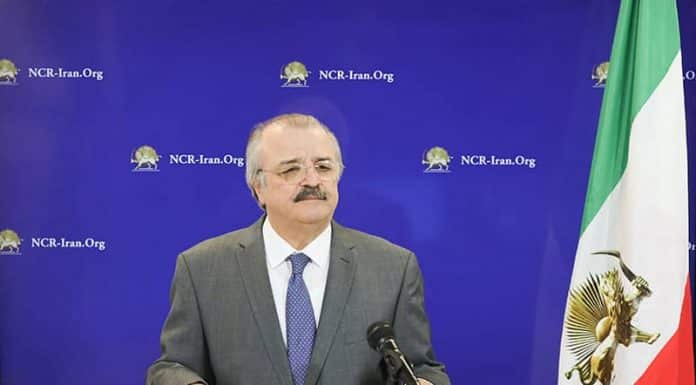 In a news briefing on Wednesday, 26 May, Mr. Mohammad Mohaddessin, Chairman of the Foreign Affairs Committee of the National Council of Resistance of Iran (NCRI), talked at a news conference on the most recent events regarding the Iranian regime’s sham Presidential election, its implications and consequences, and the international community’s role.

The Chairman of the NCRI Foreign Affairs Committee emphasized that the election process is determined by the regime’s internal power balance, not by the people. To achieve the president of his favorite candidate, Ebrahim Raisi, a prominent member of the death commission, which sent 30,000 political prisoners to the gallows in 1988 and ordered hundreds of more executions in the early 1980s, Khamenei forewent the “‘Moderate-Hardliner’ theatrics.”

“The regime will become more vulnerable in the face of the looming nationwide uprising waiting in the wings,” Mohaddessin warned, implying that this predictable decline will backfire by weakening the regime’s power structure and making it unable of dealing with the current disastrous socio-economic crisis. When it does, it will be significantly more intense and extensive than it has been in recent years. In a nutshell, for Khamenei, this is a battle of survival.”

“Even this hollow show of force cannot and will not provide a way out of the deadly impasse Khamenei is facing,” Mohaddessin warned. Because he is confronted with a time bomb, a society on the verge of exploding, and a resistance movement acting as the spark.

“All repressive measures, including arrests, executions, and social media restrictions, have failed. “The nationwide call for a boycott of the sham election has gained momentum, and people are openly calling for the regime’s overthrow,” NCRI Foreign Affairs Committee Chair said.

Mohaddessin used the fact that officials and state media were raising the alarm to support his case. “They warn about the growing appeal of Mojahedin-e Khalq supporters and resistance units among the public, especially among the youth, every day,” he continued, “and openly speak about their impact on the hearts and minds of the Iranian public.”

Criticizing the western powers, NCRI’s Foreign Affairs Committee Chair warned that the fundamentalists believed they could get away with murder if they acted quickly.

“Take a look at the last month’s events. Killings and bombings may be found everywhere, from Kabul to Riyadh, Beirut to Baghdad, and Damascus to the Gaza Strip. Without a doubt, the Iranian regime is to blame,” he stated.

Mr. Mohaddessin referred to NCRI President-elect Maryam Rajavi’s remarks that there was no longer any justification for appeasing and engaging with this dictatorship.

“Any interaction and cooperation with the mullahs will help repression and killing of the Iranian people,” the NCRI Foreign Affairs Committee Chair stated.

It will aid the regime’s acquisition of nuclear weapons and the escalation of regional conflicts. The moment has arrived for the West to stop appeasing China and take a hard stance.”