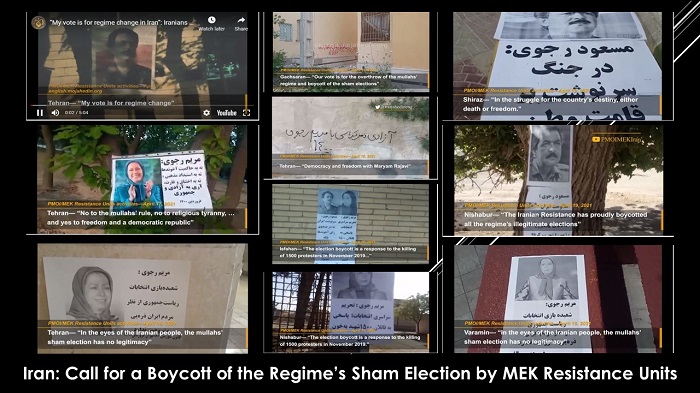 The upcoming boycott campaign seems to be as successful as the one during the regime’s rigged parliamentary elections in February 2020. The People’s Mujahedin of Iran (PMOI / MEK Iran), the National Council of Resistance of Iran (NCRI)‘s primary constituent group, has continuously urged Iranians to refuse to vote in any election as a protest against the lack of genuine alternatives to the theocratic system.

The regime’s determination to consolidate power became evident when the presidential ballot was released this week.

The regime’s Guardian Council rejected all high-profile figures who would have posed a challenge to Supreme Leader Ali Khamenei’s preferred candidacy, current Judiciary Chief Ebrahim Raisi, in addition to banning members of the other faction from running for president.

In a press conference on Wednesday, Mohammad Mohaddessin, the chairman of the National Council of Resistance of Iran’s (NCRI) Foreign Affairs Committee, addressed the situation, calling the regime’s sham election “a travesty, a selection process by a supreme leader who is himself unelected.”

Khamenei has the power to appoint six of the Guardian Council’s 12 members, as well as the head of the judiciary, who in turn picks the other six, according to the NCRI’s Foreign Affairs Committee Chairman. “As a result, the outcome of the election is not decided by the people. It is determined by the regime’s internal power balance,” he added.

Mr. Mohaddessin emphasized how recent events distinguish this year’s sham election from all those staged in Iran over the past four decades.

The fact that the sham presidential election will take place at a time when the regime is still battling to recover from the impacts of recent upheavals is one of the most significant.

These events not only highlighted the public’s dislike for a tightly regulated political process but also promoted a statement of support for regime change while revealing the incumbent regime’s vulnerability to an established opposition party.

Raisi has a long record as the “hanging judge,” having overseen the judiciary’s response to the November 2019 uprising, which included innumerable cases of torture in addition to the 1,500 fatalities.

He is best recognized for being one of the major perpetrators of the 1988 massacre of 30,000 political prisoners. Khamenei is adding to a long list of endorsements for the massacre’s legacy by endorsing Raisi’s election to the presidency.

His additional suggestions focus on how Western governments must go beyond rejecting the current system to supporting the Iranian people and the Iranian Resistance in creating a new one.

At last week’s news briefing, Mr. Mohaddessin highlighted the NCRI’s proposals for Western policymakers in consideration of Raisi’s imminent appointment as the regime’s next president.

He urged them to pay close attention to the Iranian people’s anger and plans for an electoral boycott, as well as the lack of choice within the electoral system.

Mr. Mohaddessin said democratic countries should “Echoe the call of the Iranian people and condemn this sham election as illegitimate.”