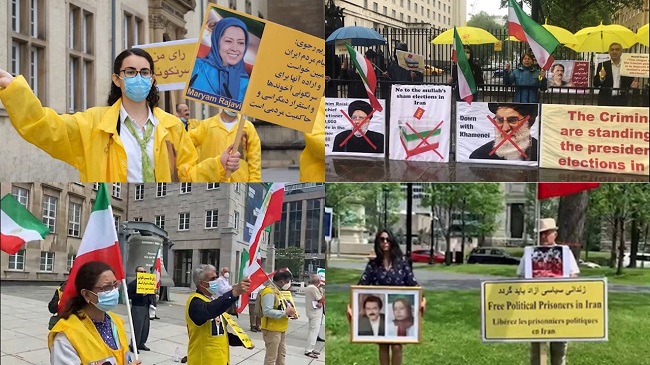 Many Iranians have joined The National Council of Resistance of Iran (NCRI), and the People’s Mujahedin of Iran (PMOI / MEK Iran), the main opposition movement, to support the boycott of the elections, believing that the sham democratic process is nothing more than a masquerade for the dictatorship to install their hand-picked candidate. This preference has a long history, and it appears to mirror a pattern in which some of Iran’s worst human rights violators have been routinely rewarded for their determination to commit political violence and brutality.

Ebrahim Raisi has proved this determination in a variety of ways, both at home and abroad when it comes to the use of political violence. Raisi ordered the torture of thousands of political prisoners as the head of the judiciary after a widespread anti-government movement in November 2019, in which 1,500 people were killed in a couple of days.

Raisi, on the other hand, is well known for his part in the slaughter of political detainees in the summer of 1988. When the regime’s founder, Ruhollah Khomeini, issued a fatwa ordering the execution of all MEK members and supporters in prison, Raisi was acting as Tehran’s deputy public prosecutor.

Raisi was quickly appointed as one of five members of the Tehran “death commission,” which was in charge of the interrogation and execution of over 30,000 political prisoners in Tehran.

Efforts to reveal Raisi’s complicity in the murder are intimately related to activism aimed at Iran’s influence networks and disinformation tactics, which are constantly fighting efforts to raise public knowledge about the atrocity.

One example is the activity of Mohammad Jafar Mahallati, a former Iranian ambassador to the United Nations and current Professor of Religions at Oberlin College, who is accused of playing a key role in the 1988 massacre’s immediate aftermath cover-up.

Since 2007, Mahallati has worked at Oberlin, but he has utilized his position to continue defending a brutally repressive dictatorship and downplaying the criminal backgrounds of its top officials, including Ebrahim Raisi.

Many Iranians have demanded Mahallati’s dismissal from the university. Princeton scholar Xiyue Wang, who was held captive in Iran from 2016 to 2019, welcomed the initiative. He told media that he was “glad” to see Mahallati under such scrutiny and hoped that it would be extended to “other regime promoters on American campuses, such as Hossein Mousavian.”

The US Department of Justice prosecuted Kaveh Lotfolah Afrasiabi, a political scientist from Massachusetts, with several violations of the Foreign Assets Registration Act in January. His arrest brought to an end a 13-year career as an operator for the Iranian regime, during which he was paid more than a quarter of a million dollars to promote the regime’s talking points through legitimate Western media.

Raisi’s forthcoming election provides Tehran with even more motivation to suppress a movement that seeks to expose his misdeeds and promote Western policies that lead to regime accountability.