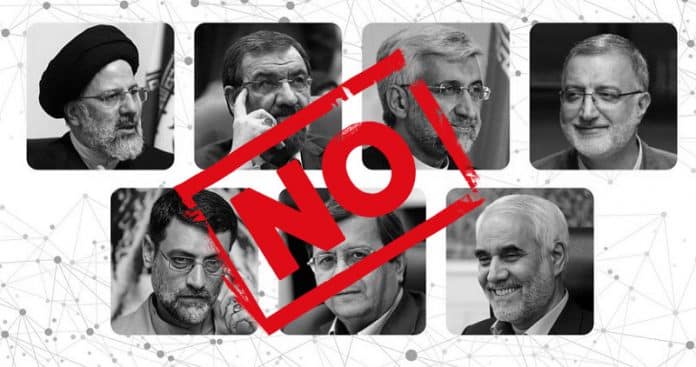 All prospective candidates who would have been regarded as “reformists” have been purged by the Guardian Council, which acts as an instrument of the Supreme Leader’s will. This came as no surprise, given that it did the same thing in the run-up to parliamentary elections in February 2020, boosting public support for a boycott. However, the boycott had already gained pace as a result of the National Council of Resistance of Iran (NCRI), and the People’s Mujahedin of Iran (PMOI / MEK Iran)‘s organizational operations.

This seeming rejection of the entire Iranian election apparatus emphasizes the idea that the elections are only a “game.” In view of this sentiment, the Supreme Leader appears to have seen little value in seeking to maintain the illusion of real choice at the polls.

As a result, the Guardian Council went over and beyond its predicted rejection of “reformist” candidates, withdrawing those from the voters who would have had strong establishment support and therefore posing a true challenge to Ebrahim Raisi.

Former Parliament Speaker Ali Larijani and Rouhani’s predecessor Mahmoud Ahmadinejad, who was constitutionally eligible to run for the office even after his two-term administration, were among these figures.

Ahmadinejad said he would boycott the election if he was not allowed to run when he registered as a potential candidate earlier in May. Despite the fact that his logic differs greatly from that of most ordinary Iranians, his controversial remarks support the assertion that this election is a projection of the Mullahs’ crisis.

Official reticence on the movements and their aftermath, according to some reports, is likely to boost the boycott campaign. In just a few days in November 2019, Iranian police killed around 1,500 innocent demonstrators and arrested several more.

Many of those arrested were subjected to systematic torture by a judiciary run by the man who will go on to become Iran’s next president. Reuters confirmed in a special report on December 23, 2019, about the deadly crackdown on November nationwide protests in Iran the death toll of 1500 that was announced by the People’s Mojahedin Organization of Iran (PMOI) on December 15, 2019.

Raisi already had left a cruel legacy more than 30 years before, when the entire government revealed the extent of its devotion to crushing any viable alternatives to the policies and theocratic philosophy held by all officials.

Ruhollah Khomeini, the regime’s founder, issued a fatwa in 1988 declaring all MEK members and supporters to be enemies of God and targets for public execution. As a result, “death commissions” were organized across the country to interrogate political inmates and determine who should be subject to the edict, with Raisi playing a key role as Tehran’s deputy public prosecutor.

Khamenei’s decision to appoint Raisi as president is an explicit endorsement of continued brutality against the MEK, and thereby of those Iranians who supported its democratic platform by participating in recent public demonstrations and boycotts.

The Iranian people have made it clear that they oppose the entire regime, knowing that all of the administration’s leaders and factions have been involved in all of the regime’s atrocities. It is long past time for the international community to reject the premise that the regime’s internal reform is a viable response to its history of malign activity and crimes against humanity.