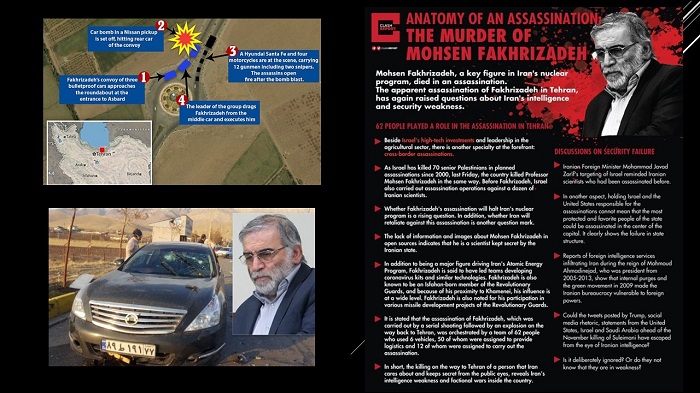 The death of Fakhrizadeh, who the Iranian opposition, the People’s Mujahedin of Iran (MEK / PMOI Iran) and, the National Council of Resistance of Iran (NCRI) has said to be ‘the father of Iran’s nuclear bomb-making projects,” has meant a quandary for the ruling theocratic regime and exposed deep tensions within it. At the time of writing, no-one had admitted to the murder and it appears the regime has yet to make an arrest. The more conservative faction in the regime led by Supreme Leader Ali Khamenei has yet to come up with any evidence of a foreign plot to murder Fakhrizadeh, which is the version they are pushing the most.

MEK spokesperson Shahin Gobadi accused Iranian officials, specifically Ali Shamkhani, of espousing "rage, rancor, and lies against #MEK" tying this to the trial of an Iranian diplomat in an alleged 2018 bomb plot against MEK officials in Villepinte, France.#WeStand4FreeIran #Iran pic.twitter.com/9t1qsxCayh

The regime is in a bit of a quandary as the more moderate elements are hoping that the incoming Biden administration in the U.S. will remove sanctions and renew the nuclear agreement brokered by the E.U. and President Obama. Any rash attempt at retaliation might jeopardize this. At the same time, if nothing is done in retaliation, the regime faces ridicule amongst neighboring regimes and proxies Tehran finances.

The tensions have exposed deep-seated differences within the ruling regime between the conservative faction, bristling with rage and contempt for the U.S., whatever the administration in power, and the more moderate wing led by Hassan Rouhani.

“Some of the remarks and comments—either before or after the assassination of Fakhrizadeh is rooted in this obvious point that appealing the enemy for negotiations contains this wrong message that Iran is weak. The enemies’ impression of a weak Iran will lead to more economic pressure and less security,” said the official Majlis (Iranian parliament) website.

While many Iranian politicians and military officials seek revenge in the name of Fakhrizadeh in the violent tradition of the regime, Khamenei is also using the death of Fakhrizadeh to push support for Iran’s nuclear program. https://t.co/oKR4bWYMEt #MEK #Iran pic.twitter.com/8dUmeaaWUG

The fact that Fakhrizadeh could so easily be murdered, one more in a line of murders of nuclear scientists over the last few years,  shows that the regime has shown itself incapable of protecting its most valuable people. As Hossein Dehghan, a candidate preferred by Khamanei for the upcoming presidential election said: “Some media reports and individuals’ remarks are because they are uninformed about the issue.

Fakhrizadeh was completely protected, his protection was provided by high-ranking security teams, and he had [bulletproof] vehicles. However, this event took place… This [attack] was not the first and we previously experienced assaults on Imam Khomeini shrine or the Islamic Consultative Assembly [Majlis]. It is imperative to find from where this [security] breach has carried out?”

Fereydoon Abbasi Davani, #IRGC commander and chair of the Parliament Energy Commission:
Don't call us national security disturbers! I have details about #Fakhrizadeh, his jobs and goals. If JCPOA defenders monopolized and abused him, I will severely act.pic.twitter.com/bz0iXufVAT

There have been plenty of Twitter comments thrown to and from. Mohammad Reza Zaeri, a spokesperson on Khamenei’s side of the factions tweeted: “In the past few years, whenever we spoke about problems, restrictions, failures, and dilemmas, Hassan Rouhani‘s administration usually responded to us that ‘We have security.’ ‘Citizens’ were happy about the expertise of the country’s security institutions and intelligence organizations. However, were they uninformed about the threat against Fakhrizadeh?”

“In such sensitive circumstances, we must only trust in our people and not leave their questions unanswered. Otherwise, we will face daily decreases and erosion of the state’s social capital and public trust. In such a scenario, a disaster far greater than the lack of Fakhrizadeh awaits us,” added Zaeri.

ARAB NEWS (@arabnews): Iranian activists claim regime has hidden #nuclear facility
… The details of the nuclear site would be revealed at a press conference on Friday by the National Council of Resistance of Iran (NCRI).#Iran @Iran_Policyhttps://t.co/PKi7zwpNAR

It is certain, however, that the regime will continue to lie and deceive in order to continue their nuclear program and pursuit of nuclear weapons.

The  People’s Mojahedin Organization of Iran (PMOI / MEK Iran), and the National Council of Resistance of Iran (NCRI), reported many times that the mullahs will continue to push for nuclear weapons in Iran, despite the JCPOA, as demonstrated by the Strategic Act to Lift Sanctions. Tougher sanctions need to be put in place against the regime to ensure that they cannot break the terms of any agreement in place to prohibit them from building nuclear weapons. The international community must join efforts in a firm stance to ensure that the regime does not obtain this power and to ensure the safety of the Iranian people, and International communities.

Iranian Regime in Confusion Over Response to Fakhrizadeh’s Death