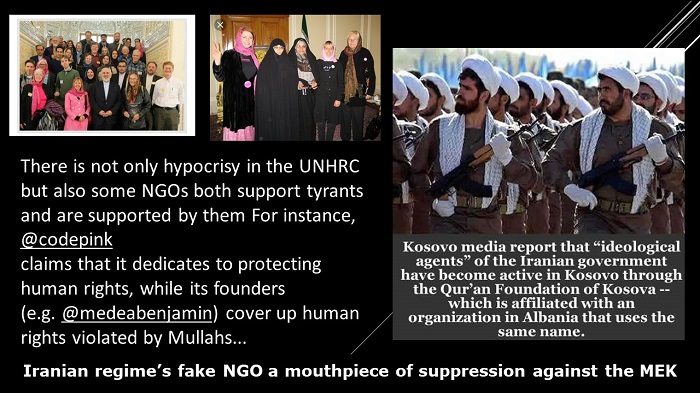 Non-governmental Organisations (NGOs) are usually considered synonymous with charity and human rights. They are private organizations that are not connected or affiliated with any government. NGOs are supposed to serve a social goal, such as for a humanitarian or environmental cause.

As a part of its misinformation campaign, The Iranian regime has formed artificial NGOs to spread #FakeNews against the opposition @Mojahedineng (#MEK) and whitewash the regime's #HumanRightsViolations.https://t.co/6puOOZFwLz

In the case of the Iranian regime’s supposed NGO, the Association for Defending Victims of Terrorism (ADVT), the objective is far more malicious. The aim of the ADVT is to spread propaganda and demonize the democratic opposition of the regime, the People’s Mujahedin Organization of Iran (PMOI / MEK Iran). The supposed NGO simply functions as another mouthpiece of suppression of the mullahs’ regime.

The regime’s Ministry of Intelligence and Security (MOIS) established ADVT in June 2007 in an attempt to prevent Europe and the United States governments from removing the (PMOI / MEK Iran) from their blacklists. In order to do so, they invented false cases and allegations to make the (PMOI / MEK Iran) appear to be a dangerous terrorist organization. The ADVT also endeavored to meet with foreign ministries of European countries, as well as other unaffiliated agencies, under the guise of being an NGO in order to campaign against the democratic opposition, the MEK.

The ADVT was unsuccessful, and courts in Europe, the United Kingdom, and the US revoked the (PMOI / MEK Iran) from their blacklist between 2006 and 2012. Many politicians from the aforementioned countries have further stated that the MEK should never have been blacklisted at all.

The clear bias of the ADVT is demonstrated by its membership, which is comprised of regime officials from the MOIS and Judiciary. For, example, in Tehran, the Deputy Attorney General of the regime, Mohammad Javad Heshmati, is responsible for attending meetings with the ADVT.

Commanders of the Islamic Revolutionary Guards Corps (IRGC) and its terrorist branch, the Quds Force, are also members of the supposed NGO. Mohammad Abdollah-Pour, a commander of the Quds Force, holds regular ADVT meetings in Gilan province.

There is not only hypocrisy in the UNHRC but also some NGOs both support tyrants and are supported by them
For instance, @codepink claims that it dedicates to protecting human rights, while its founders ( e.g. @medeabenjamin) cover up human rights violated by Mullahs…
⏬⏬ pic.twitter.com/C6uh2T98B8

The state-run Khane-e Melat news agency reported on 9 October 2019, confirming that: “The ADVT attended a meeting, which was also attended by officials from the Ministry of Interior, the Ministry of Foreign Affairs, and the Red Crescent.”

The regime was even able to enter the ADVT to the UN Human Rights Council in their efforts to make the organization appear to be a valid NGO. The International Committee in Search of Justice discussed the outcry among other genuine NGO’s about this decision in a report about the activities of the MOIS:

“In the hope of demonizing its organized opposition, the Iranian regime has gone so far as to set up state-controlled ‘non-governmental organizations’ at the United Nations Human Rights Council to disseminate false information about the (PMOI / MEK Iran). This action has led to protests by other non-Iranian NGOs at the Human Rights Council over the abuse of the NGO framework and mechanism.”

This so-called NGO never help Iranian women reach thier voice to the world and get free from Mullahs who ban the women from the right of clothing
Now this NGO is in Iran where women have to follow Islamic codes such as compulsory Hijab
Iranian women fight for their right alone pic.twitter.com/R2cOKewRz8

Further to this on 15 May 2017, three NGOs with consultative status at the Human Rights Council, such as the Women’s Human Rights International Association, submitted a formal statement, to the UN General Assembly member states.

“Since the civil society in Iran does not enjoy the freedom of expression (as exemplified by the cases of Sattar Beheshti and Narges Mohammadi) the Iranian government has resorted to creating NGOs in order to whitewash its systematic and widespread violation of human rights by abusing the NGOs’ consultative status and other facilities at their disposal to tarnish the image of the democratic opposition and Iranian independent NGOs who are in exile.”

The ADVT should not be allowed a place in the UN Human Rights Council and should be exposed in its true nature as a false NGO. Further to this, it should be internationally acknowledged as a tool to further the suppressive agenda of the regime and destroy the democratic Iranian resistance, (PMOI / MEK Iran).