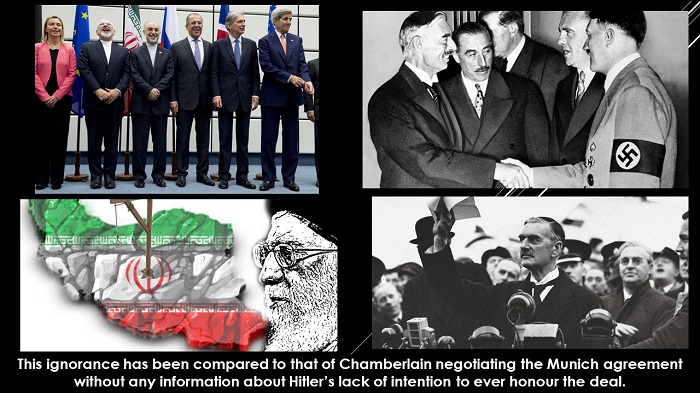 Officials from Europe and the United States are on record, demanding a broader and stronger nuclear deal than was originally made in 2015 for the Joint Comprehensive Plan of Action (JCPOA). The National Council of Resistance of Iran (NCRI), and the People’s Mujahedin of Iran (PMOI / MEK Iran), reports that these officials want to directly address the regime’s terrorism and ballistic missile proliferation.

Tehran’s mullahs rejected both their avenues of investigation, however, which casts the seriousness of the discourse into considerable doubt. It can be argued however that any engagement with an oppressive state that organises its power through denial, duplicity and deceit is immensely futile, regardless of the “good faith” of the negotiators.

The Europeans are trying to fit a square peg into a round hole by trying to use negotiations and diplomacy to address the many facets of the Iranian regime. This ignorance has been compared to that of Chamberlain negotiating the Munich agreement without any information about Hitler’s lack of intention to ever honour the deal.

European signatories are endeavouring to persuade the regime to change its behaviour, however, this presumes that all wrongful behaviour on the part of the regime (pursuit of nuclear weapons and terrorist sympathies) Is anomalous and not entirely the basis of the regime.

The regime’s biggest vulnerability comes from its historical political and religious illegitimacy. It has no popular domestic base, and it is sailing too close to the wind. It desperately needs a power source, external of its constituents.

All duplicitousness conducted by the regime is a normal and integral part of the Islamic State. The state will, therefore, strive to secure sanction relief without actually intending to honour any serious matters imposed by the Joint Comprehensive Plan of Action.

Mrs Maryam Rajavi, the President-elect of the National Council of the NCRI noted that the Islamic Revolutionary Guard Corps (IRGC) must be labelled a terror organisation by the EU. This is coupled with the Ministry of Intelligence and Security which were complicit in the foiled 2018 bomb plot in Paris. This is why the European Union must seek restrictive measures on the human rights abuses in Iran.

What has proven to be more effective against Iranian rulers is firm pressure from external policies. The mullahs won’t retreat until face with a chagrin strategic choice that impacts the continuation of the regime, but this will never come to pass if the regime is continually given a platform to deceive and manipulate.