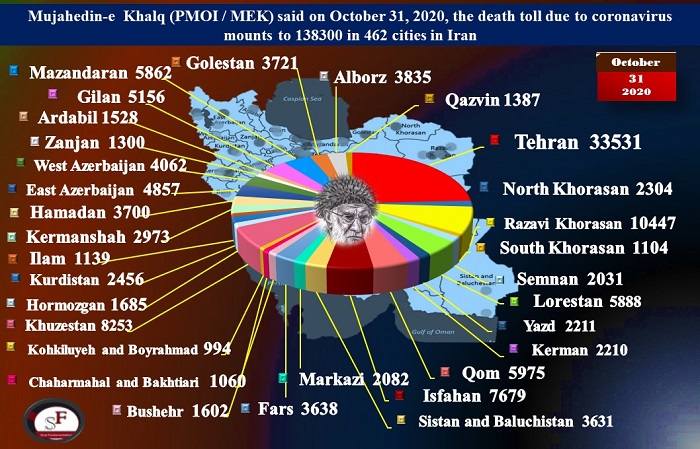 Iran’s Covid-19 situation is dire and getting worse, but the Iranian regime deliberately refuses to admit the full horror that has unfolded in Iran, still clinging to figures of daily infections and deaths which are far lower than the reality. Unfortunately, the misinformation is not helped by the fact that the discrepancy between what The National Council of Resistance of Iran’s (NCRI), and the People’s Mojahedin Organization of Iran (PMOI / MEK Iran) is reporting from internal sources and what the government is reporting, is not emphasized by international media.

More than 138,300 people have died of the novel #coronavirus in 462 cities checkered across all of Iran's 31 provinces, according to the Iranian opposition PMOI/MEK.

The situation is getting so bad in Iran, that even the Health Ministry is now beginning to sound the alarm bells over the real state of affairs and the inability of the health system to deal with the huge number of patients reporting for treatment.

More than 138,300 people have died of the novel #coronavirus in 462 cities checkered across all of #Iran's 31 provinces, according to the Iranian opposition PMOI/MEK. pic.twitter.com/4tYwoLbkWH

International media reports are understandably full of detail about the pandemic all around the world but unfortunately reports about Iran do not take into account the most realistic figures and tend to gloss over the reasons why Iran’s infection rate and the death toll is so bad. This lack of insight allows the Iranian regime some breathing space so it can ignore its own contribution to the disaster in Iran and blame the death toll on U.S. sanctions. This just absolves the mullahs, whose poor response to the spread of the virus and lack of financial support for an effective health response, has contributed in no small way to the appalling death toll.

It must be noted whenever sanctions are used as an excuse for the regime’s handling of the pandemic that medicines are not included in the sanctions anyway.

Mrs. Maryam Rajavi, the NCRI’s president-elect, has said all along that the regime has huge assets available to it which it could use to help ease the burden of the pandemic. The Supreme Leader, Ali Khamenei, and the IRGC between them are hoarding hundreds of millions of dollars which should be used to support the health ministry, not foreign terrorists or nuclear arms development.

Whatever numbers are used to account for the effect of the pandemic in Iran, there is no denying that the spread of the virus has been spiraling out of control and that the health system in Iran has been stretched beyond its capacity to deal with it. Tehran is expected to lose even more control over the disease over the coming months.

The #coronavirus is the mullahs’ strongest ally; imprisonment and executions are their most essential instruments of power; and the Islamic Revolutionary Guard Corps (IRGC) is the most reliable killing machine to prop up their rule. #Iran pic.twitter.com/ueKbLQ2W20

It would be helpful if the international media report more completely on the Covid-19 situation in Iran and give better insight into what is happening inside the country. This would have some direct benefit to all those Iranians who are suffering at the moment from a despotic and incompetent government that is more terrified of its own people than it is of the virus.

Iran has experienced widespread public protests at least 5 times since the end of 2017. These protests may have been sparked by economic hardship or rash decisions made by the regime, but have quickly coalesced around opposition to the mullahs themselves. The MEK has been fully involved in a leading role with these protests.

Overcoming #Coronavirus, as is the case with overcoming poverty and high prices in contingent upon overthrowing the clerical regime and establishing people's sovereignty, in which case all of our nation's resources will be utilized for advancing and improving people's lives #Iran pic.twitter.com/JdH2LRvGic

The regime’s incompetence in handling the Covid-19 pandemic in Iran cannot be wished away or ignored. The regime consistently refuses to treat the pandemic and the health and well-being of ordinary Iranians as a priority. The only lasting solution to this is the removal of the mullahs and a new, democratic government installed in their place. Mrs. Maryam Rajavi has consistently made this point in all her recent speeches.

It’s hard to see regime change taking place in Iran without an uprising by the majority of the people. Mrs. Maryam Rajavi has urged the international community to oppose the repression being meted out by elements of the Iranian regime, like the IRGC and its Basij arm. She also calls on the international community to support the Iranian people in their quest for a free and democratic Iran.