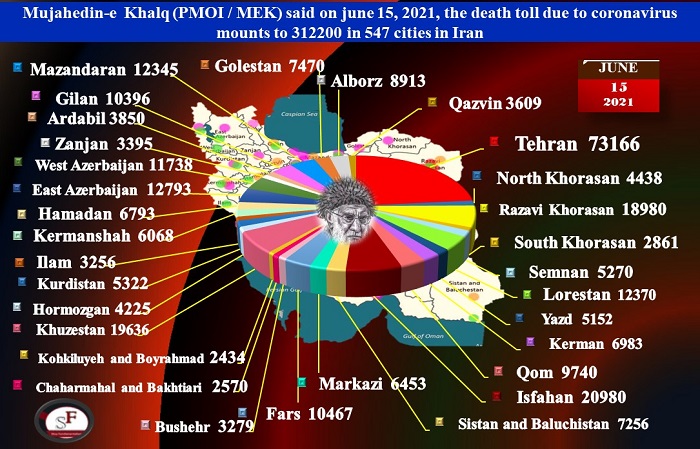 The National Council of Resistance of Iran (NCRI), and the People’s Mujahedin of Iran (PMOI / MEK Iran), reported that the coronavirus has killed approximately 312,200 individuals in Iran.

However, the regime claims that the true figure is 81,000. The reality remains that the fundamentalists’ corruption and incompetence have allowed the virus to grow exponentially, with the extremely contagious Indian and South African varieties sweeping the nation among the mainly unvaccinated people.

The supreme leader, Ali Khamenei has banned the use of all Western vaccines, notably those from the United States and the United Kingdom.

As a result, the clerical dictatorship has been obliged to rely on a sporadic supply of Sinopharm and Sputnik vaccines from China and Russia. As a result, only 4 million people have received the vaccine so far.

Iran’s hospitals are inundated with very ill coronavirus patients, but there are limited resources available to treat them.

Personal protective equipment was sold on the illicit market by officers from the Islamic Revolutionary Guard Corps (IRGC), leaving hospital employees without it.

The coronavirus outbreak has occurred at a time when Iran’s economy is is in the worst situation since the 1979 revolution that brought the Islamists to power.

The regime’s corruption and warmongering policies are wreaking havoc on the country’s 80 million people. The regime’s role in ruining Iran’s economy has even been acknowledged by the state-controlled media.

On May 30, the state-run Sharq daily reported, “the latest statistics published by the Ministry of Industry, Mines and Trade, the prices of some types of livestock and poultry feed, fruits, legumes and rice, oil, live poultry, as well as metal in 2020, have increased by more than 100%. The price of 41 goods has increased by 50 to 100 percent.”

“The economic crisis is the result of inefficiency, both in terms of human resources and administrative factors, and also due to [the regime’s], structural contradictions.” the state-run Eghtesad-e Pouya news agency claimed on June 7 in a harsh indictment warning of a social breakdown.

Eghtesad-e Pouya claims that “Huge economic projects belong to the affiliates and relatives of the main center of power. Due to the lack of necessary conditions, they often do not finish the project or finish with extraordinary expenses and several times higher prices. Due to the lack of necessary expertise, the national capital is wasted. These projects become a means of trial and error, and people’s capital, instead of advancing sustainable development projects, is used in proxy wars.”

Workers, craftsmen, teachers, pensioners, and scammed investors are among those who have taken part in widespread uprisings, which display public fury and loathing for the Iranian regime, as well as the people’s intention to overthrow it.

Further outbreaks of infection will have terrible impacts, which will almost certainly coincide with the results of the corrupted presidential elections and the election of the despised executioner Raisi as president.

This could be the catalyst for the next uprising, as a poor, destitute, and brutalized populace revolts against medieval rule and reclaims control of their nation.