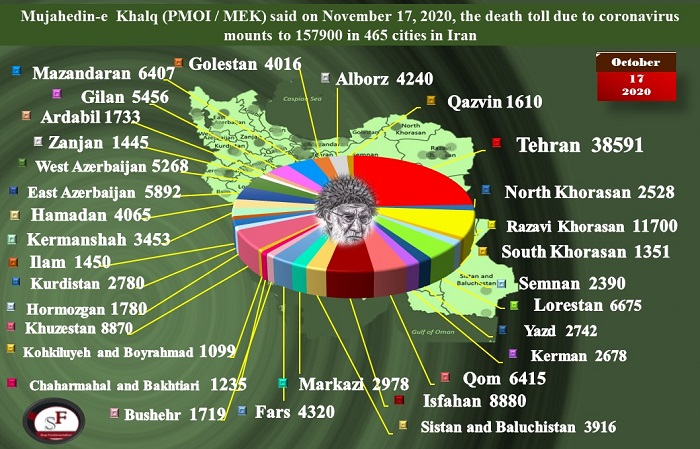 The People’s Mojahedin Organization of Iran (PMOI / MEK Iran) and the National Council of Resistance of Iran (NCRI) has been closely monitoring the COVID-19 outbreak in Iran since the outset. It has been in touch with local authorities, morgues, and of course the people, seeing how the situation evolves in each province. The latest death toll it is reporting is 157,900 – nearly four times that reported by the Iranian regime’s Ministry of Health (42,461).

More than 157,900 people have died of the novel #coronavirus in 465 cities checkered across all of Iran's 31 provinces, according to the Iranian opposition PMOI/MEK.

The Ministry of Health said on Monday that there have been 483 new deaths and more than 13,000 new cases in the previous 24 hours. The spokesperson also reported that there are now 5,677 people in intensive care units (ICUs) across the country. Each of these figures is unprecedented, showing that the situation is still not under control, whether the regime’s figures are understated or not.

Many regime officials and scientific and medical experts have been calling on the government to put an immediate lockdown of at least two weeks into place. However, the regime keeps rejecting this despite not being opposed to the recommendation.

Iran: The People’s Mojahedin Organization of Iran (PMOI / #MEK) announced this afternoon, November 17, 2020, that #Coronavirus has taken the lives of more than 157,900 in 465 cities across #Iran.https://t.co/Mv8yQCNHtK

In a statement on Sunday, President Hassan Rouhani said that cities would be facing “severe restrictions” from next week in accordance with the advice given by the National Coronavirus Task Force.

Abdolreza Rahmani Fazli, the Minister of the Interior, said that “engineered numbers” or “secret stats” must not be tolerated, stating that the Minister of Health is making decisions based on statistics.

The official figures and statistics provided by the regime have been engineered since the beginning of the outbreak, hence the (PMOI / MEK Iran)’s close monitoring of the situation. The regime has always downplayed crises it faces, including but not limited to poverty levels and unemployment statistics.

More than 156,700 people have died of the novel #coronavirus in 465 cities checkered across all of #Iran's 31 provinces, according to the Iranian opposition PMOI/MEK. pic.twitter.com/s834JUjhMN

At the beginning of the week, a member of the National Coronavirus Task Force spoke about the evolution of the crisis, saying that now “we are currently at the peak of coronavirus and the situation is very critical”. Massoud Mardani said that urgent action needs to be taken because many hospitals are working at full capacity and simply cannot accept any more patients. He advised: “There must be a serious action or a public shutdown.”

Hinting that the government’s response to the outbreak has been focused more on the economy than anything else, Mr. Mardani said: “Economic excuses must give way to priorities for improving the healthcare situation of different segments of the society. There must be an agreement to shut down big cities for at least three weeks. We suggested the lockdown two weeks ago and repeated it several times, but regretfully, due to opposition from some, it has remained unresolved.”

Other officials and experts have spoken out about the country’s death toll, highlighting that more people per 100,000 are dying in Iran than the world average. A member of Tehran’s City Council said on Monday that the economic situation of most of those that have died in Tehran was “lower than average”, showing that some sectors of society are worse affected, emphasizing major inequalities in society.

Mrs. Maryam Rajavi the President-elect of the National Council of Resistance of Iran’s (NCRI): The mullahs ruling Iran facilitated the spread of coronavirus and did not make any serious efforts to contain it. This is why the pandemic has turned into a source for hidden escalation of fury and anger.