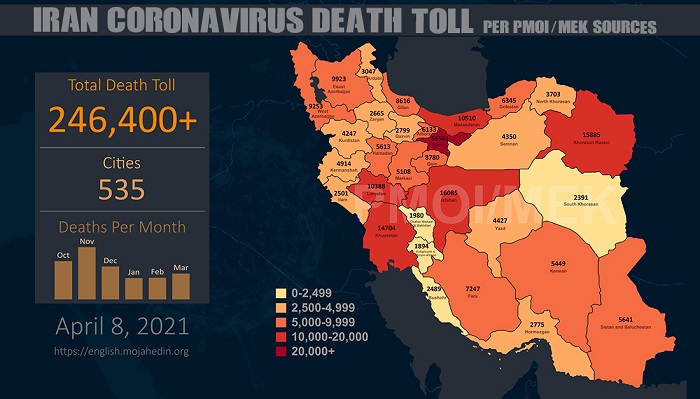 The Covid-19 outbreak has unquestionably devastated nearly every country on this planet. But nowhere has the government’s response to the pandemic been more reckless, mismanaged, and cruel than in Iran. According to the most recent estimates by The National Council of Resistance of Iran (NCRI), and the People’s Mujahedin of Iran (PMOI / MEK Iran), coronavirus deaths are approaching 246,400 across 535 towns across the nation, with 56,561 fatalities in the capital alone.

Officials, including the regime’s Supreme Leader Ali Khamenei and President Hassan Rouhani, who dismissed the magnitude of the outbreak for months, have now acknowledged a harsh fact that tens of millions of Iranians have already lived through. Regime Health Minister Saeed Namaki admitted, “We have lost control of COVID-19.”

Khamenei and Rouhani, on the other hand, bear ultimate blame for the increasing casualty count. The horrific and current wave of Coronavirus, according to Maryam Rajavi, President-elect of Iran’s National Council of Resistance, is attributed to the Mullah’s barbaric policies.

“With astonishing cruelty, Khamenei banned the import of the British and American vaccines into the country, while refusing to provide the bare minimums for workers from hundreds of billions of dollars pillaged wealth of the Iranian people amassed in institutions he controls. In doing so, he has forced them to go to the COVID-19 killing field to make ends meet.”

Admittedly, in January 2020, the government covered news of the virus’s spread in Iran in order to ensure a high turnout in the sham presidential election. The regime refused to quarantine the cities and, unlike other nations, did not offer any financial aid to help people who had lost their jobs. It monopolized the delivery of hygiene supplies and delayed paying the wages of tens of thousands of nurses and caregivers who risked their lives every day to save the lives of their fellow citizens.

This barbaric policy was part of the regime’s major catastrophic plan, which was implemented in December 2017 and November 2019, when mass demonstrations shook the regime to its roots. When the virus first arrived in Iran, Khamenei called it a blessing and an opportunity.

The rising number of casualties undoubtedly dispirited a society dealing with the loss of loved ones while still attempting to save their own lives. Furthermore, with the virus spreading like wildfire, even the most enraged and outspoken individuals were hesitant to unleash their frustration in large crowds, which would have further enhanced the spread of the coronavirus.

Even if it turned out to be successful for a short time period, this approach has backfired, as evidenced by recent protests. In addition to the uprising in Sistan and Baluchistan in the Saravan region in February 2021 where security forces shot 40 protesters and injured 100 more.

Following the uprising, numerous sectors, including pensioners, factory employees, teachers, students, and nurses, as well as workers in the oil and gas industry, have staged nationwide protests in demand of a government change.

The ongoing protests prove that the overwhelming majority of Iranians understand that as long as the Mullahs rule the nation, the extreme socio-economic crisis will not get resolve.