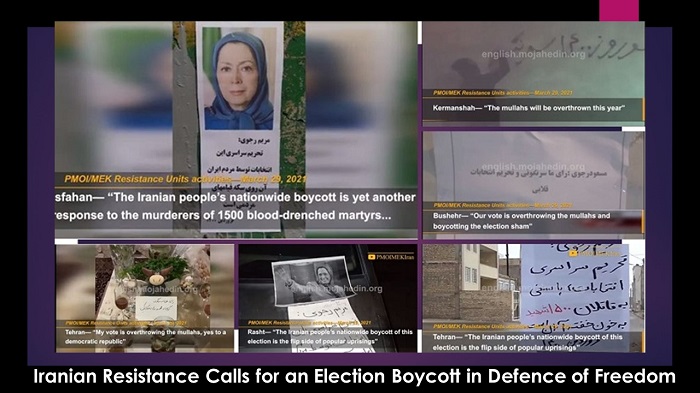 The National Council of Resistance of Iran (NCRI), and the People’s Mujahedin of Iran (PMOI / MEK Iran) reported that the Iranian regime’s most recent parliamentary elections, held in February 2020, saw the lowest levels of voter turnout in the regime’s 40-year history. This fact was recognized also by official government outlets, which have a history of exaggerating votes turnout in order to give the impression that the ruling system’s authority is widely accepted.

This policy has made Iran the hardest-hit country in the Middle East and one of the worst-hit countries in the world. This statement is confirmed by own estimates of the regime, even though those estimates are far from being the real figures.

Around 60,000 Iranians have been killed so far by Covid-19, according to the Iranian ministry of health. However, detailed estimates from the People’s Mujahedin of Iran (PMOI / MEK Iran) show that approximately one-quarter million people have been killed.

As a result of efforts by the government to project an impression of force and political stability, the Iranian people have greatly suffered. This policy did not only not have the desired effect on political engagement, but also gave the populace even more grounds for endorsing the message of the national uprisings and denying the country’s theocratic leaders any claims of legitimacy.

In the lead-up to the fake Presidential elections, the regime is in a particularly difficult position. There can be no question that Khamenei and others are afraid of the impact of another effective poll boycott both at home and abroad. Indeed, in a speech on 17 February, the supreme leader expressed this fear personally, even though he called it to the Iranian people as a constructive appeal.

“The more public participation in the elections, the more effects and benefits it will have for the state,” Khamenei said. “Whenever we approach elections, the enemy starts saying, ‘there is no freedom and the elections are engineered,’ to disperse the people from taking part in them.”

Many Western politicians welcomed what seemed to be Rouhani’s come-from-behind win in 2013, even portraying it as a partial victory for “reformists.” Iranian activists, on the other hand, disputed this narrative, pointing to the lack of freedom of choice in all Iranian elections, as imposed by the Guardian Council, a body charged with screening legislation and high-ranking candidates to ensure they are in line with the supreme leader’s wishes.

There is good reason to believe that the next fake presidential election will also feature these tactics. In this context, the Regime is well aware of the fact that the popular opinion in recent uprisings has only increased in the past year, despite the fact that mismanaged outbreak of coronavirus has made mobilization on a broad scale much more difficult for activists. In recent weeks, there have been signs of that collective re-emerging, especially in marginalized communities like those in the border province of Sistan and Baluchistan.

Maryam Rajavi cited in multiple speeches marking the Iranian New Year holiday, Nowruz. “The Persian year 1400 will see the blazing of the flames of uprisings from underneath the ashes of disease and repression. It will see the people of Iran rising up again to overthrow the regime,” “the regime’s sham presidential election bears no legitimacy in the eyes of the Iranian people.”