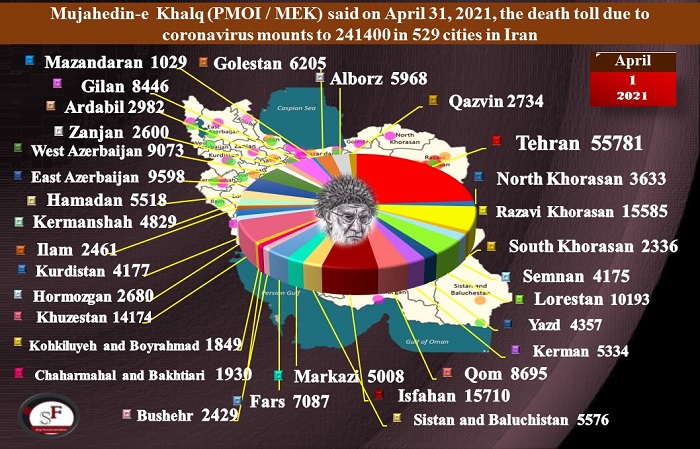 The National Council of Resistance of Iran (NCRI), and the People’s Mujahedin of Iran (PMOI / MEK Iran), reported on 8 January, Ali Khamenei declared, “the import of American and British Covid-19 vaccines is forbidden,” “I have said this to the officials, and now, I am saying it publicly.”

The coronavirus, also known as COVID-19, has taken the lives of over 241,400 people throughout Iran, according to the Iranian opposition (PMOI / MEK Iran).

Governments all over the world are working hard to speed up the vaccination process against the deadly coronavirus. By significantly reducing the death rate, they could take significant steps toward eradicating this dreadful virus. The Iranian regime, on the contrary, is pushing the country in the opposite direction.

Officials excuse their foolish procurement of coronavirus vaccines by questioning their effectiveness. On 27 February, Hassan Rouhani stated, “The side-effects of the vaccines are not truly clear for us, and which vaccine is more effective and until when they are effective.” “Some people across the globe are even afraid of injecting the vaccine!”

Consequently, mass vaccination in Iran will begin in six or seven months in the best case. On 29 December 2020, the semi-official ISNA news agency quoted Yahya Ebrahimi, a member of the Parliament (Majlis) Health Commission declaring, “mass production of this vaccine needs certain infrastructure, and the Covid-19 vaccine in Iran will begin mass production in July or August of 2021.”

In addition, Kianush Jahanpour, the former Health Ministry Spokesperson who is now the head of the Food and Drug Organization, stated that 50,000 volunteers will be recruited for the Phase III clinical trials. According to Jahanpour, “technology transfer and joint production were preconditions for allowing human testing in the country.”

Vaccines were promptly dismissed by the regime

The news of the last-stage clinical trials of Cuban Covid-19 vaccines was promptly dismissed by the regime. However, their anonymity, as well as their conflicting statements and bravado, caused analysts to look into the matter in great depth.

Reuters wrote on 9 January, “Cuba said late on Friday it had signed an accord with Iran to transfer the technology for its most advanced coronavirus vaccine candidate and carry out last-stage clinical trials of the shot in the Islamic Republic.”

Iranian people were horrified when they discovered that experimental vaccines were being injected into cleaners. The government was criticized by the netizens for putting impoverished people at risk. Following public anger over the government’s terrible decisions, Jahanpour appeared on state television on 26 March to deny the injection of Cuban vaccines into cleaners. “the trial of the Iranian-Cuban coronavirus vaccine has yet to start.”

Iranian government refuses to pay the salaries of public workers

The state-controlled media made no mention of when these impoverished citizens got their first vaccine injection or why the government had not reported the first phase. In the meantime, the Iranian government refuses to pay the salaries of public workers, as well as their insurance benefits. Therefore, it is too odd that the government had vaccinated low-income workers for free.

Iranian officials are using the health crisis to ensure their dominance, arguing that “Iran is not in another world, and it is impossible that the world achieves significant successions and decreases the death rate while the coronavirus victims in Iran are on the rise.”