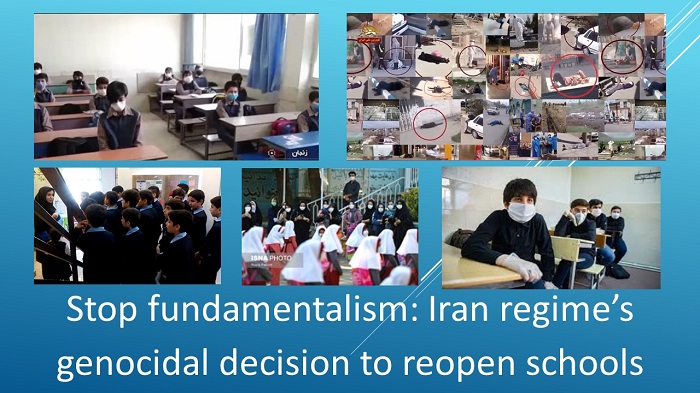 The coronavirus has now killed over 129,900 people in Iran, according to the National Council of Resistance of Iran’s (NCRI), and the People’s Mojahedin Organization of Iran (PMOI / MEK Iran),  because the regime has refused to take any sensible measures, like paying non-essential workers to stay home and have instead used the poor as cannon fodder against the virus.

One of the most affected groups were children and young people, who were all sent back to school early while the virus was still raging, which resulted in a major spike in cases.

Selseleh governor Afshin Tarkarani said that 39 students tested positive for the virus in just one day and that because of the virus spread Alshotor and Firouzabad schools are closed. He said the most positive cases were recorded among students aged 7-17.

President Hassan Rouhani recently claimed that it was essential to reopen schools during the pandemic because of the 20 million students left out of education, but doctors and medical experts across the country disagreed.

Dr. Abbas Aghazadeh, head of the General Assembly of the Medical Council, said: “Many countries that are in better conditions than in Iran and have a much lower death toll are cautious in reopening schools.”

The head of the Iranian Academy of Medical Sciences Dr. Alireza Marandi wrote to Rouhani about the alarming rate at which the coronavirus is spreading, urging him not to reopen educational centers, while Hossein Kermanpour, the Secretary-General of Public Relations and International Affairs of the Medical Council and Head of Emergency at Tehran’s Sina Hospital, said that schools shouldn’t be opened while the virus is still so out of control and that all known medical experts agreed.

Dr. Ali Akbar Haghdoust, chair of the Epidemiology Committee in the National Covid-19 Task Force, said “Scientifically, schools and universities can be reopened when we witness a virus-reducing trend in the specific area for at least ten days. However, at the moment, the situation in our provinces is red and they are at facing the peak of the disease.”

Now in #Iran, primary school children are attacked by the #Coronavirus by the reopening of schools.
Mullah has sent Iranian children to the corona death squares
At least 39 School Students Contracted Coronavirus, One Died in Iran https://t.co/HAXycbZz8G pic.twitter.com/tAz6pTNlhB

So why did the regime suddenly reopen schools on September 5, while 15 provinces were in the worst possible conditions and 11 more were on high alert?

Online learning wasn’t working because poverty prevented students from accessing the internet or a computer, so rather than fund free internet or hand out laptops to poor students, the regime hastily reponed the schools without even informing parliament.

Shahrbanu Amani, a member of Tehran City Council, said that with the number of students, it would be a catastrophe “if one percent of this population contracts coronavirus”.

The Iranian Resistance, the  People’s Mojahedin Organization of Iran (PMOI / MEK Iran), and the National Council of Resistance of Iran’s (NCRI) wrote:  “The mullahs’ performance in countering the Coronavirus cannot be described as merely irresponsible. All the evidence points to a deliberate strategy to kill the Iranian people in order to preserve the regime. This is what the Iranian resistance calls the strategy of causing mass human casualties.”

The rising number of #coronavirus cases before the outbreak of flu epidemic in Autumn, is a product of the criminal policies of Khamenei and Rouhani. #Iran

Mrs. Maryam Rajavi the President-elect of the National Council of Resistance of Iran’s (NCRI): The regime’s criminal rulers in Iran to open schools without having the minimum hygienic and preventive preparations