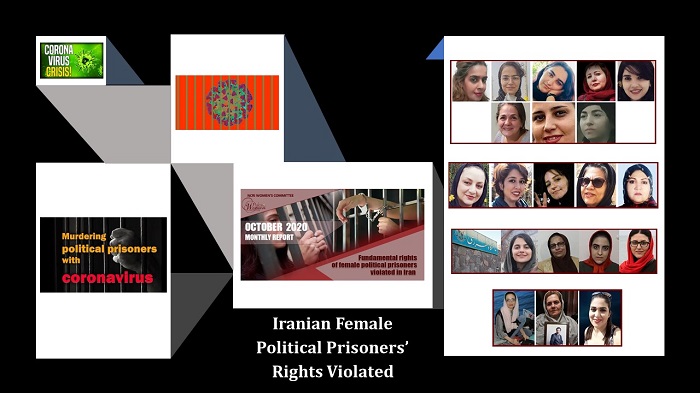 The Iranian regime is ramping up its show of force against the people of Iran, especially anyone who shows any sign of dissent or opposition to the existence of the regime.

According to reports by the Iranian opposition, the National Council of Resistance of Iran’s (NCRI), and the People’s Mojahedin Organization of Iran (PMOI / MEK Iran), thousands of people have been imprisoned because of their political views, including many women.

#PMOI #MEK: The relocation of female political prisoners from Evin to other prisons is taking place while prison authorities in #Iran have not taken any effective measures to rein in the spread of the coronavirus in #Iranian jails. https://t.co/0kwmZgxrrW #FreeIran2020 pic.twitter.com/8hzEjncAF1

These female political prisoners face terrible conditions in prison. They have been subjected to humiliation and their rights violated, even if the charge against them does not justify it.

Female prisoners face conditions which are not justified

These prisoners have been subjected to:

While #news & #socialmedia have been reporting what d #Iranregime wants u to know..

Female prisoners are not separated from those who have been infected with Covid-9 and other infectious diseases, allowing the virus to spread easily through the squalid conditions. The regime has allowed the virus to spread through the prisons in order to suppress and intimidate the inmates. The regime hopes that the virus can eliminate as many of the prisoners as possible, saving them from having to keep them in prison or going through the motions of executing them. Prisoners who are sent to the hospital receive little or no treatment and are often sent back to the ward while still sick.

Here below are some examples of female prisoners’ suffering in different Iranian prisons.

Fatemeh Mosanna – in Evin prison in Tehran, suffered from intestinal hemorrhaging. The Evin clinic refused to treat her until her condition worsened when she was set to Taleghani Hospital.

Saba Kord Afshari – removed a cast on her ankle by herself after an ankle injury had been sent in a cast. The prison authorities did not provide her with any medical help.

Mojgan Kavousi, a Kurdish writer in Evin Prison was denied surgery in her own choice of hospital. Instead, she was told she would have to go to Taleghani Hospital, where there are many Covid patients.

Massoumeh Senobari is serving eight years in prison on the charge of supporting the People’s Mojahedin Organization of Iran (PMOI / MEK Iran), a political prisoner in Tabriz Prison, has Covid-19 after contracting it from ordinary prisoners. She has been denied leave for treatment.

Nejat Anvar Hamidi, in Sepidar Prison, Ahvaz. She is charged with membership in the People’s Mojahedin Organization of Iran (PMOI / MEK Iran), she suffers from a number of medical conditions, including Covid-19. She has been denied treatment by prison authorities.

Elham Barmaki, a Baha’i prisoner of conscience, was transferred to Qarchak prison from Evin, where she is held with ordinary prisoners. This has become a common tactic by the regime and is done to intimidate political prisoners amongst sometimes dangerous criminals. 7 other Evin female prisoners have been moved to similar nonseparated prisons

Nasrin Sotoudeh, a lawyer, is one of those who have been transferred from Evin to Qarchak.

Yasaman Ariyani and her mother, Monireh Arabshahi, were imprisoned for refusing to wear the hijab. They have been transferred from Evin to Kachouii Prison in Karaj.

Maryam Nassiri, a 62-year-old lawyer, has been transferred from Evin to Qarchak.

There are 200 female prisoners held in the women’s ward in Urmia Prison. Urmia and Qarchak are notorious for their Covid-19 infections. Many of the November 2019 protesters arrested ended up in Qarchak.

The only female prison ward where political and ordinary prisoners are separated is at Evin Prison, but there is a report that the authorities at Evin Prison are going to close down the separate ward for political prisoners. This follows further restrictions on conditions in prison, such as telephone time.

Zahra Safaei has suffered from a heart attack but was returned to the ward at Qarchak after inadequate treatment. Zahra Safaei and her daughter and one other female prisoner were imprisoned for supporting the People’s Mojahedin Organization of Iran (PMOI / MEK Iran) and distributing anti-regime propaganda. These three women are in danger because of attacks made against them by ordinary prisoners

The regime continues to arrest and detain women. Many of these women are civil rights activists.

Many of these women were students or professionals working in diverse occupations in the community.

Ms. Farangis Mazloum was sentenced to 18 months in prison because of her political activism.

Maryam Payab was arrested after the November 2019 protests. She was sentenced to 1 year with 74 lashes on October 22nd this year.

Fatemeh Khoshrou was arrested for her part in the same protests and sentenced to a yearin prison.

Many of these female prisoners have faced brutal treatment either before or in prison.

Sheno Rahmati and Fatemeh Rahimi were imprisoned in Kermanshah’s Correctional Center for Rehabilitation. They mounted a peaceful protest over the terrible conditions in the prison but were beaten by guards and then taken to solitary confinement.

A female head of the Basij, Soheila Zahiri, is in charge of the women’s section, and is particularly nasty, and excels in trying to make the conditions for female prisoners as brutish as possible. “Prison authorities have summoned some of the prisoners and threatened to send them to prisons in remote locations. In addition, sick prisoners have been punished by being deprived of receiving their medicines, and other prisoners face restrictions in making phone calls,” said one of the inmates’ family members.

Shahin Solhjoo, a 60-year-old political prisoner in Tabriz Prison, developed herpes zoster, an infectious disease. The authorities tried sending her back to the general ward with other prisoners after they feared catching the disease themselves but eventually made her sleep in an outside yard by herself in the cold. 150 women in Tabriz Prison are exposed to herpes and 9 of them have already been infected with Covid-19.

Political prisoners Zahra Safaei and Golrokh Iraee were once again threatened to death by an ordinary inmate. The woman, hired and provoked by the warden of Qarchak Prison, swore at, attacked, and threatened to kill them.#Iran#HumanRightshttps://t.co/ZDOU4xaCq8

Mrs. Maryam Rajavi the President-elect of the National Council of Resistance of Iran’s (NCRI): I urge the international community, especially the United Nations Secretary-General and other human rights organizations to intervene immediately to stop the executions, secure the release of the prisoners, and prevent a major humanitarian catastrophe in Iran’s prisons.

I urge the international community, especially the United Nations Secretary-General and other #HumanRights organizations to intervene immediately to stop the executions, secure the release of the prisoners, and prevent a major humanitarian catastrophe in #Iran’s prisons pic.twitter.com/LFt91vSPGI