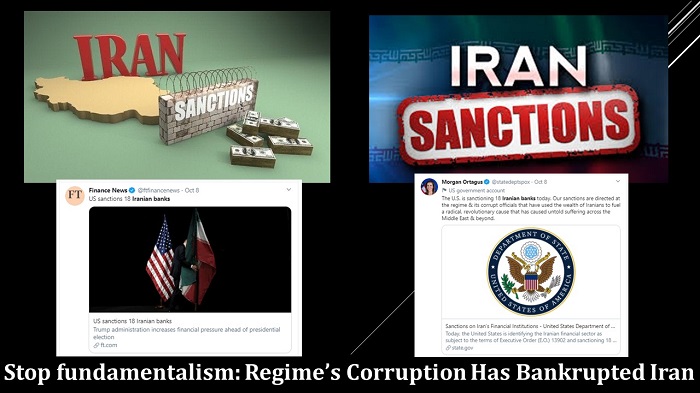 Late last week, the U.S. imposed sanctions on eighteen of Iran’s banks. The regime responded by stating that such action only made life harder for the Iranian people.

Today @USTreasury sanctioned 18 banks all owned by the Iranian regime, some controlled by #Iran regime's military and the IRGC. This timely action "under E.O. 13902 does not affect existing authorizations and exceptions for humanitarian trade." https://t.co/sA84u6MRrF

More importantly, what has been making life worse for ordinary Iranians is the corruption by the regime which has resulted in an unfair distribution of the country’s wealth. It is this action that persuaded the Iranian people to take part in public protests demanding a fairer deal.

The U.S. is sanctioning 18 Iranian banks today. Our sanctions are directed at the regime & its corrupt officials that have used the wealth of Iranians to fuel a radical, revolutionary cause that has caused untold suffering across the Middle East & beyond. https://t.co/2l6IhFTyWC

Now the people of Iran have had to deal with the COVID-19 pandemic which due to the regime’s mishandling of the pandemic has caused over 120,000 lives to be lost, according to reports by the Iranian opposition People’s Mojahedin Organization of Iran (PMOI / MEK Iran), the official death count declared by the mullahs’ regime stands at 28,544, around a fourth of the actual figure.

More than 120,800 people have died of the novel #coronavirus in 458 cities checkered across all of #Iran's 31 provinces, according to the Iranian opposition PMOI/MEK. pic.twitter.com/HixsdMtNk7

If the regime hadn’t covered up the extent of the virus in the country in the first place there would have been fewer casualties. In fact, the regime failed to admit that there was a crisis as a result of Covid-19. Despite being able to learn from other countries little was done to protect the people. Virtually no money was released while the mullahs were busy developing missiles.

Mrs. Maryam Rajavi the President-elect of the National Council of Resistance of Iran’s (NCRI): The rapid rise in the number of Coronavirus victims in Iran is part of the mullahs’ strategy of creating mass casualties to forestall the danger of an uprising and their overthrow.

Empty food baskets appear to be a norm in today’s #Iran. But as this is becoming more commonplace the #Iranian regime handing out skyrocketing loans to their relatives, so they can go out to dinner and dine on shark fin soup and imported expensive fruit.#MEK #FreeIran2020 pic.twitter.com/F7cpqHdnDb

There were some lockdowns but not for long as the regime feared there would be further uprisings as forced unemployment caused by temporarily closing businesses and other agencies were causing starvation. The only answer was to tell people to get back to work and go to school. This just made the casualty situation worse as more people went down with the virus. Despite the regime’s Supreme Leader saying around $1 billion of Iran’s National Reserve Money would be allocated to help combat the coronavirus but no money was actually received according to the health minister.

The rapid rise in the number of #Coronavirus victims in #Iran is part of the mullahs' strategy of creating mass casualties to forestall the danger of an uprising and their overthrow. #COVID19 pic.twitter.com/Ao8Zh9dYL3

Iranians were pretty much out on their own when dealing with the fallout from Covid-19, as the mullahs’ regime had other things on its mind like the showcasing of two ballistic missiles despite the economic downturn caused allegedly by sanctions. It was also pursuing its nuclear capability in earnest. None of the money spent on weaponry is ever going to be of any use to ordinary Iranians.

There is little doubt after seeing the mullahs’ response to the pandemic that possessing a nuclear bomb, financing terrorism, and increasing the stockpile of weapons of mass destruction have always been prioritized by the regime and the people are the one’s paying for it out of the nation’s wealth.

#Iran: Despite Obstacles, US Accelerates Push for Longer Arms Embargo on Iran’s Regimehttps://t.co/w5cWLMSAha

Where does Iran’s wealth go?

There is plenty of evidence to suggest that the mullahs are corrupt, one example of which is the loss of a mere $35 million and Sharq, a state-run daily, reported what Mohammad Javad Zarif, the regime’s foreign minister said, which was “we had to give $35 billion to some individuals. But it is not clear how they wasted this money and where they took it.”

Mrs. Maryam Rajavi, the Iranian opposition leader, has said over and over again that: “so long as the clerical regime in Iran has not been overthrown, it will not let up on executions and torture. Nor will it let up on misogyny, religious discrimination, terrorism, and warmongering.”

Finally, Iran’s economy is under the control of the mafia, so no ordinary Iranian is ever likely to gain until it is overthrown and replaced by a government that supports freedom and

Mrs. Maryam Rajavi said: The clerical regime has plundered our nation for 4 decades, wasting their wealth on nuclear and missile projects and on terrorism.democracy.

Mrs. Maryam Rajavi has emphasized time and time again that the only way the regime will ever stop plundering the nation’s wealth is when it collapses. The people want regime change and they are supported wholeheartedly by the Iranian Resistance (PMOI / MEK Iran).