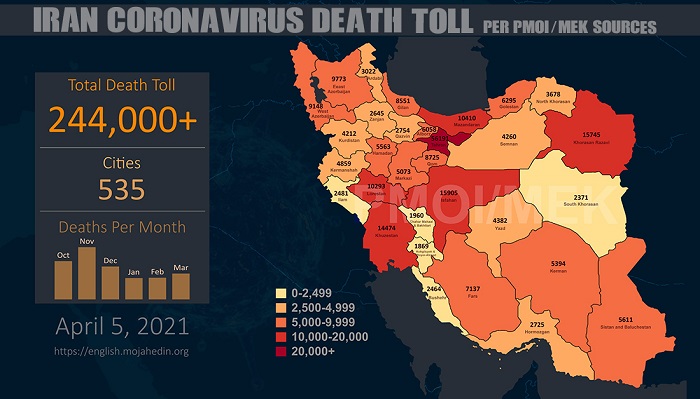 Today, Iran is still struggling with the worst pandemic in the Middle East and one of the worst in the world. The regime’s Health Ministry estimates that the disease has killed 60,000 Iranians, but this is due to widespread underreporting in early 2020, after more than a month of outright denials that anyone had been infected. The true death toll is estimated to be about a quarter of a million, according to estimates compiled by the National Council of Resistance of Iran (NCRI), and the People’s Mujahedin of Iran (PMOI / MEK Iran).

Nonetheless, this does not adequately describe the hardships that the Iranian people are experiencing. The Covid-19 outbreak is only one part of a wider pattern, and its consequences have been compounded by years of economic recession and the regime’s disregard for the people’s basic needs. This neglect resulted in the emergence of a national uprising in the final days of 2017, which lasted into January 2018.

Following dozens of killings and thousands of arrests, regime officials were finally able to put an end to the uprising. The underlying movement for democracy, however, remained active, fuelled no doubt by the symbolism of the regime’s supreme leader admitting that the theocratic structure was more fragile than he had previously admitted.

The second national uprising lasted barely more than a week before brutal suppression sent it underground as well. The November 2019 repression was much more severe, the Islamic Revolutionary Guard Corps opened fire on crowds of demonstrators across the country, killing over 1,500 people. Despite the fact that riots erupted across several provinces only two months later, the November crackdown was eerily prescient of the socio-political atmosphere under which the first coronavirus outbreaks would emerge.

When the Islamic Revolutionary Guard Corps (IRGC) shot down a commercial airliner near Tehran in January 2020, several Iranians demonstrated their willingness to defy the regime’s repression in order to keep the mullahs responsible for some of their worst actions.

However, when Covid-19 became an additional obstacle to people who wished to gather peacefully in public spaces, making large-scale demonstrations much more difficult to maintain. The problem was worsened by the pandemic’s global economic effects, which made it even more difficult for Iranians to make a living.

The regime’s Supreme Leader Ali Khamenei refused to disclose any of the hundreds of billions of dollars in properties he has stashed in so-called religious foundations, and the IRGC has maintained a close grip on its companies and financial holdings, which currently account for more than half of Iran’s GDP.

To worsen the health crisis, Khamenei prohibited the import of American and British-made vaccines and then assigning vaccine distribution to IRGC-linked corporations, which are almost likely to make self-serving decisions and try to profit more than possible from the Iranian people.

Mrs. Maryam Rajavi, President-elect of the National Council of Resistance of Iran (NCRI) in her speech marching the Iranian New Year Nowruz said, “the people of Iran were, and still are, struggling amid disease, poverty, and hunger,” “will see the people of Iran rising up again to overthrow the regime.”