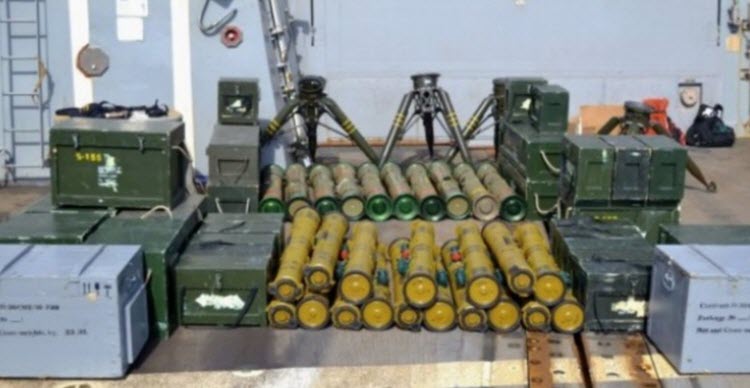 Thomas Gibbons-Neff has reported that several weapons shipments have been intercepted this year, many of which contained a large number of Iranian weapons. Much of this has had similar markings to weapons used by Houthi rebels in Yemen.

The U.S. has said that five shipments of weapons being moved from Iran to Yemen were intercepted. The report said that markings on rifles, rocket launchers, anti-tank guided missiles and munitions are further proof that Iran is providing support to Houthis fighting in Yemen.

The first of the five interceptions was in April last year. The American analysis of the seized material points to “the existence of a weapon pipeline extending from Iran to Somalia and Yemen, which involves the transfer, by dhow, of significant quantities of Iranian-manufactured weapons and weapons that plausibly derive from Iranian stockpiles”.

On one of the vessels during a search in March 2016, approximately 2,000 Kalashnikov-style rifles with serial numbers in sequential order were found. This suggests that the weapons are from a national stockpile. The report indicated that the rifles were “characteristic of Iranian manufacture”.

The report claimed: “The presence of materiel in Yemen with matching lot numbers and displaying the same serial number sequence as weapons seized by the FS Provence, supports the assertion that materiel on board the dhows was ultimately destined for Yemen, and likewise, that the materiel recovered in Yemen probably originated in Iran.”

The Pentagon confirmed that in March the USS Sirocco “recovered upward of 1,500 rifles as well as rocket launchers and 12.7mm heavy machine guns”.