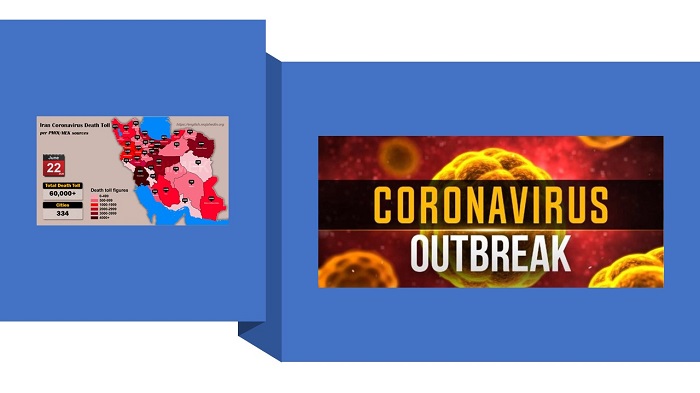 By Jennifer Jones-Kelley: More than 60,000 people from 334 cities in all 31 provinces in Iran have died from coronavirus, according to a June 22 statement from the (PMOI / MEK Iran). More than 16,000 of these deaths have occurred in hospitals in Tehran Province.

This number does not include deaths that have occurred outside of hospitals in the province.

Over 60,000 people have died of the novel #coronavirus in 334 cities checkered across all of #Iran’s 31 provinces, according to reports tallied by the Iranian opposition PMOI/MEK as of Monday afternoon local time, June 22.https://t.co/o275Rq15ty

On Monday, Alireza Zali, Commander of the Task Force Combating Coronavirus in Greater Tehran stated that approximately 20 percent of people living in Tehran have been infected with coronavirus, according to the Revolutionary Guards (IRGC)-affiliated Fars news agency.

Zali blamed residents of the province for the outbreak in comments carried by the state-run Aria news agency, saying: “In this Province, instead of coronavirus, we are facing Corona-Plus virus … This virus, apart from its complex biological, social, cultural, and economic dimensions, will change almost all systems in the Province…” Given the increase in the virus outbreak, a number of hospitals that had reduced their service to coronavirus patients need to be re-opened… At the start, on average, health and smart social distancing protocols were observed by 62%. After two weeks, 28%, it then fell to 11%, and now it has reached less than 9%.”

#Maryam_Rajavi: The number of #Coronavirus victims exceeds 60,000 across #Iran. The regime is claiming that just less than 10,000 , yet the #PMOI #MEK is reporting that more than 60,000 have died (as of Monday 22th June).https://t.co/QkYzodXYXQ #Iranian #coronavirus @USAdarFarsi pic.twitter.com/DDSTzSww3z

Zali failed to mention that social distancing became difficult to observe when Iranians were prematurely forced to return to work, as previously reported by the MEK.

The Governor of the city of Mahshahr, Khuzestan Province lamented the explosion of coronavirus cases in his city in an interview with Hamshahri daily on Monday. “Since mid-May … we have been witnessing the red and extraordinary situation in Mahshahr, and we have had a daily increase in the number of Coronavirus patients,” he said.

On Sunday, the president of Kashan University of Medical Sciences in Isfahan Province told the state-run Mehr news agency, “The number of patients in the Kashan area has increased by ten times compared to the previous days.”

On Monday, the Vice-president of Mashhad University of Medical Sciences in Khorasan Razavi announced, “The test results of those who refer to the centers covered by the University is 40% positive. While in the past, 20 to 25 percent were positive. In recent weeks, the number of outpatients has increased dramatically,” according to state television and radio.

The President of the University of Medical Sciences in Golestan Province reported disturbing news about the province’s children. “The number of children infected with Coronavirus in Golestan has increased. So far, six deaths due to Coronavirus has occurred among children in Golestan,” he said, according to Mehr news agency.

On Sunday, the President of the Medical Sciences University in Qazvin Province reported that coronavirus infections had increased 25 percent since the beginning of the month, according to the Mehr news agency.

On Monday, the official IRNA reported: “The Governor of Genaveh recommended to his counterpart in Bushehr to enforce a strict lockdown of the city. One of the most important issues is the rise in the number of hospitalizations, and the hospital is full. Out of 377 infected patients, 94 are government employees, and 25 percent are the medical personnel and health care providers, who exit the cycle of providing services. If this trend continues, it will be extremely hard and difficult for the medical staff to provide them with services.”

On Monday, the President of the Medical Sciences University in the city of Zahedan, Sistan and Baluchestan Province reported: “We are witnessing the rise of Coronavirus across the Province. Regrettably, we have the spread of the virus in all cities. Last night, 85 patients with acute respiratory problems, who had tested positive for COVID-19, were hospitalized in Avicenna Hospital in Zahedan. Our colleagues announced that the Hospital is full,” according to the state-run Tasnim news agency.

Hamshahri daily quoted the President of the Medical Sciences University in Ilam Province on Monday, who said, “Since the outbreak of the virus, we have had the worst situation in terms of both the number of infections and hospitalizations in the province in the past 48 hours.”

Mrs. Maryam Rajavi is the President-elect of the National Council of Resistance of Iran’s (NCRI): As a result of Khamenei’s, Rouhani’s anti-human policies, Coronavirus is ablaze and taking lives all over Iran.