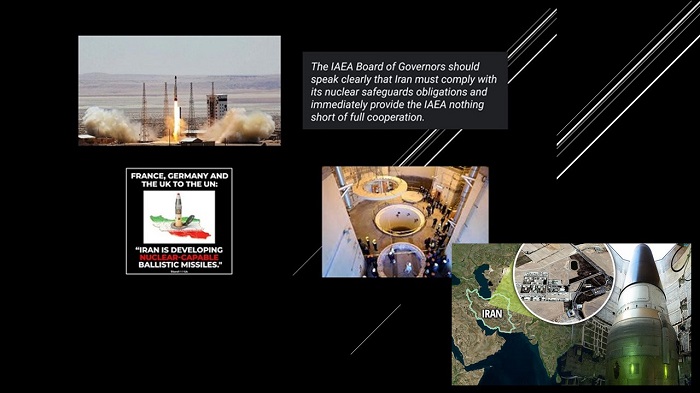 Five years ago, the Joint Comprehensive Plan of Action (JCPOA) was agreed upon. When it was signed in Vienna in 2015, many saw it as a new start for the Iranian regime, and one that would see the regime become more moderate in its behavior.

However, many skeptics said very frankly that the deal was one-sided and that Iran was the only one to benefit.

Now, five years later, we can see that not only has the regime not become any more moderate, but its behavior has deteriorated. Struan Stevenson, former president of the European Parliament’s Delegation for Relations with Iraq (2009 to 2014) and current coordinator of the Campaign for Iran Change, recently wrote about the situation five years on.

He described the nuclear deal as former President Barack Obama’s “last-ditch effort to achieve a major foreign policy legacy before he left office”. It was doomed from the very beginning because Iran was the one winning with the deal – the West was due very little in return for some major concessions.

Stevenson said that while it was “a very bad deal” for the West, it was a “breakthrough deal” for the Iranian regime. More than $150 billion in assets were released. It was the big financial boost that the regime desperately needed. Of course, instead of using these funds to improve the situation in Iran, the regime plundered it on increasing the funding of its terrorist proxy groups and militias, such as the Houthi rebels in Yemen, the Lebanese Hezbollah organization and Hamas in Gaza, to name just a few.

Struan Stevenson- Five Years Later, Nuclear Deal With #Iran Is in Tatters
A very bad deal for us and a breakthrough for the mullahs
Brutalized #Iranians now look to the West to end their appeasement of this cruel regimehttps://t.co/6FAAh2QCG3

Regarding some of the specificities of the deal, Mr. Stevenson highlighted that pages and pages of the agreement detailed the dismantling of sanctions on numerous sectors in Iran. And the West was also obliged to end its “exclusion of Iranian citizens from higher education coursework related to careers in nuclear science, nuclear engineering or the energy sector”, meaning that, in Stevenson’s words, “Western universities were being told to train Iranians in advanced nuclear technology to ensure that they were properly equipped to build a nuclear bomb”.

Regular inspections have also fallen short of expectations. Iran has been far from open about its nuclear sites and in recent months it has failed to respond to the nuclear watchdog about suspicious sites.

Far too much trust was placed in a regime that has decades of untrustworthiness behind it. Stevenson said it is “astonishing” the amount of trust placed on the regime. And not long after the deal was signed by all parties, the Iranian Supreme Leader addressed the nation, affirming that the regime “will never stop supporting our friends in the region and the people of Palestine, Yemen, Syria, Iraq, Bahrain, and Lebanon”. He added: “Even after this deal, our policy toward the arrogant U.S. will not change. Our policy in the region is 180 degrees different from the US.”

Stevenson concludes: “Five years on, the West must surely recognize that the JCPOA was a disastrous mistake and that the Americans were right to withdraw from it unilaterally.”

The National Council of Resistance of Iran (NCRI) said that it is “imperative” that the six UN Security Council resolutions on Iranian nuclear activity be reimposed, following reports from the international nuclear watchdog that the mullahs’ regime has repeatedly breached the Nuclear Non-Proliferation Treaty (NPT) and the Additional Protocol, as well as violating the Joint Comprehensive Plan of Action (JCPOA).

It also worth mentioning the role of the Iranian Resistance (NCRI) has played in exposing the regime’s nuclear activities.  This goes back to 2002 when the (PMOI / MEK Iran) revealed the facts about the intentions of the regime to obtain nuclear weapons and that nuclear facility were under construction at Natanz and Arak which had not been declared to the IAEA. Due to these revelations, Iran was considered to be non-compliant.