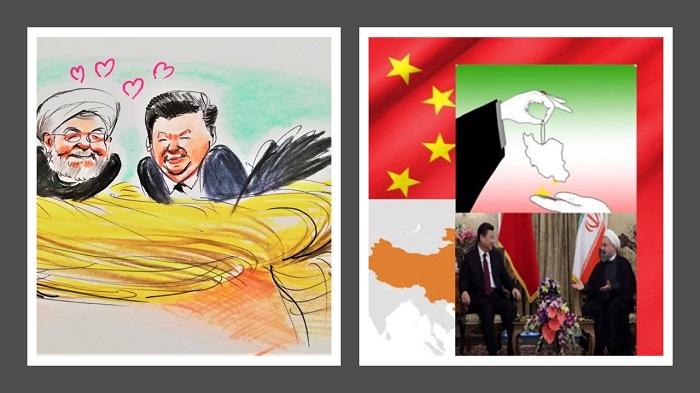 While waiting for the details about the new deal between China and Iran, many are skeptical that it will benefit the people of Iran.

Discontent about the regime’s actions

According to recent reports, by The National Council of Resistance of Iran (NCRI), and the People’s Mujahedin of Iran (PMOI / MEK Iran), the people of Iran are already voicing their discontent about the regime’s actions. Many people have said that the agreement is like the 1828 Turkmenchay contract with Russia that went against national interests.

The regime, however, is not concerned about this showing that it does not have national interests in mind when making such agreements.

The regime will do what benefits itself and the people do not seem to factor into any decision.

The regime tries to portray it as a positive move

The head of the National Security and Foreign Policy Commission of Iran’s Parliament Mojtaba Zolnour said a few days ago that the contract was in the interests of everyone and tried to portray it as a positive move. He defended the Chinese, saying that they are keen to invest in Iranian oil – the composition of which is different from that of other oil-rich nations. He said that Iran’s massive consumption of oil means that it is placing trust in Iran by investing to such an extent over the long term.

Speaking about the potential consequences of the agreement, Zolnour said: “In such a situation, it is natural that the Chinese are worried that if Iran-West relations improve tomorrow and Iran does not sell oil to the Chinese, their investment in Iran will not be productive.”

The official explained that the agreement acknowledges that China is making a very particular investment in free zones that are only attracting 2.5 percent of foreign capital per annum.

There are huge doubts about among the people

There are huge doubts about what the regime is giving the Chinese in exchange for its investments and state-run publications are equally dubious about the situation.

The state-run Arman publication has said that China is currently unable to meet Iran’s demands and claims that sanctions mean it is impossible to return funds.

It questions how the country can be trusted to invest hundreds of billion dollars in Iran.

Some of the questions it raised were as follows:

“Is it up to the Chinese side to choose where to invest and how much and in what field, or to the Iranian side?

How much of the percentage of the capital they invest is interest, and what is China’s share of the investment?

Is it just an investor and then takes the principal of its capital and interest or is it a partner in the investment?

These are just some of the points that are raising questions, referring to the content. Who knows, for example, whether to invest in oil or in the metro of 10 metropolitan areas?

With what currency does this money come into the country? Dollars or yuan?”

State media outlets have mentioned that the regime is perhaps sympathizing with countries such as Russia and China because they too are subjected to tough economic sanctions.

However, they have said that this is not the way to get sanctions lifted – something that should be a priority for Iran.