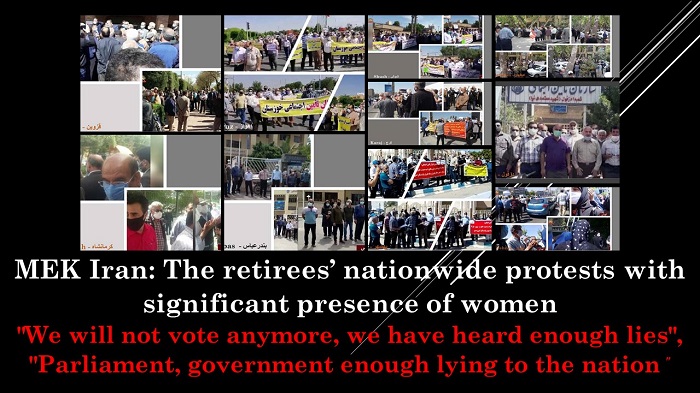 Recently, workers from different sectors of society have been marching in a call for their rights. Iran’s current financial collapse has left 90% of the population in deep poverty and misery. As the crisis worsens workers are also unable to afford the most basic necessities and are forced to protest.

The National Council of Resistance of Iran (NCRI), and the People’s Mujahedin of Iran (PMOI / MEK Iran), reported that the Iranian young teachers have decided to keep striking until their demands are met and protested in Tehran and Isfahan from 29 May to 2 June.

Protests were also held by university teachers in the regions of Khuzestan and Fars, as well as scammed customers of the Caspian and Estelak banking institutes in Tehran.

These are the demonstrations in which women were at the forefront and took the lead.

Teachers protested outside the Education Ministry in Tehran. Throughout April and May, these young teachers, largely women, staged protests outside the parliament and the Ministry of Education. However, they have not yet met their goals.

Teachers working on temporary contracts in private schools in Isfahan staged a protest outside the Isfahan Province Department of Education on 30 May. “Employment is the undeniable right of private school teachers,” Read the placards held by Iranian women.

Meanwhile, outside the parliament in Tehran, teachers from private schools also marched, chanting “The government must answer, we want justice,” these women claimed.

Teachers “selling their services” in Tehran joined young teachers in demonstrations next to the mullahs’ parliament on 31 May, demanding members of parliament to decide on their employment status.

On 30 May, professors at the Azad University of Khuzestan in Ahvaz joined the protests against their deplorable living conditions. “Some of our colleagues have serious problems,” one of the attendees at the meeting outside Azad University said.

On the same day, lecturers at Azad University in Fars Province gathered outside Shiraz’s Azad University to demand a pay raise in order to improve their living conditions.

The personnel of Karaj’s main hospital and the Bou Ali Hospital in Tehran marched inside the hospital complex on 28 May and 29 May. Hospital’s employees and personnel are working under extremely challenging conditions.

As a result of the regime’s inhumane Covid-19 policy, most health care personnel haven’t been vaccinated and are having to deal with an unreasonable amount of workload.

This demonstration saw a strong female presence. “We have been hearing lies for five years” and “enough with hollow promises, our baskets are empty,” they chanted.

Two days after, the Caspian Financial Institute investors held a rally outside Tehran’s Judiciary building. After five years, the scammed clients have yet to receive their deposits.

Landowners in Phase 6 of Pardis staged a protest outside the Judiciary building in Tehran on 1 June. They demanded their money back that the corporation in charge of building Pardis’ new metropolis had stolen.

This series of demonstrations reflects how collapsed the Iranian society has become. People from all walks of life are left with no choice but to protest in demand of their rights.