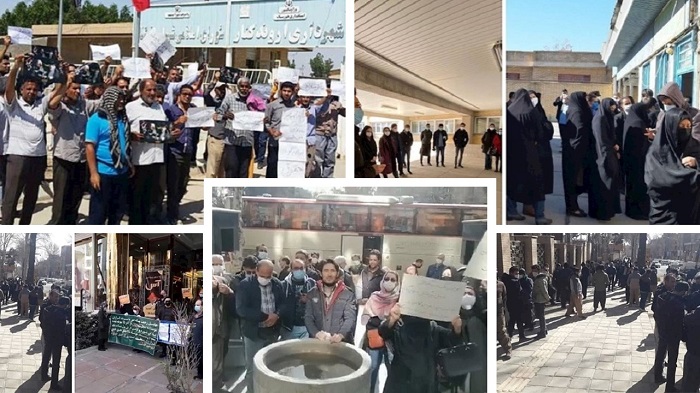 According to a thorough report compiled by the National Council of Resistance of Iran’s (NCRI), and the People’s Mojahedin Organization of Iran (PMOI / MEK Iran) several creditors who had invested in the Caspian Credit Institution assembled in front of the Financial settlement committee premises last Thursday, protesting that they had not yet received their overdue payments.

It has been 4 years since this government-backed institution took the people’s money under an official, government-approved license. Since that time, the institution’s customers have conducted regular protests, demanding that the company and the government should take action and restore their funds.

But in an agreement developed between Caspian and the government, the regime’s broadcasting outlet has revealed that just 542 cases are yet to be settled. The truth is that not one of the cases of at least 475,000 Caspian depositors has yet been fully settled and no one is listening to their demands.

Protest in the city of Isfahan

(PMOI / MEK Iran) supporters from the city of Isfahan reported that several customers of carmakers, Shahr Khodro, gathered for a protest rally in Isfahan last Friday in front of the Aseman Hotel, where the Shahr Khodro football team is based.

The protesters are depositors who have made upfront purchases of the companies’ vehicles but 3 years have passed and they have not got their cars.

The protesters chanted the following statements: “Shahr Khodro stole our cars. We will not give up until we get our cars.”

Protest in the city of Noor Abad

(PMOI / MEK Iran) supporters from the city of Noor Abad reported that a protest was held by members of a teachers’ housing cooperative in the city of Noor Abad, Lorestan province last Thursday. More than 16 years ago, they spent all the cash they had to buy land and took out high-interest loans in the hope they would own a house one day.

But for most of them, the dream will never take place, as the authorities have removed some of them completely from the list of land applicants and stolen their money.

One of the protesters said: “I am a teacher in Noor Abad who deposited the land money in the housing cooperative account in 2004 according to these documents, but now neither my name nor my address is registered here. When I deposited this money, I had nothing, and I had to borrow … our money was gone, and no one did anything for us. Someone help get our rights for god sake. We are hardworking people too.”

Protest in the city of Sanandaj

They were protesting the decision of the officials who have designated the responsibility of implementing a plan to organize the vendors of that particular street.

The vendors are eager to increase the hours they work on Ferdowsi Street. They contended that selling their goods from 6:30 pm onwards does not reap sufficient profits, and they are asking city officials to let them begin their activities earlier at 4 pm. This is because everyone is safely tucked up in their homes soon after 6:30 pm.

Protest in the city of Aravnd Kenar

One of the workers said that they haven’t been receiving the right wages for some time but they haven’t received the full amount owed for 5 to 6 months. Also, workers’ medical records have not been renewed or replaced because of the delays in the payment of social security premium. Whatever the victims do, they never seem to be able to get a response.