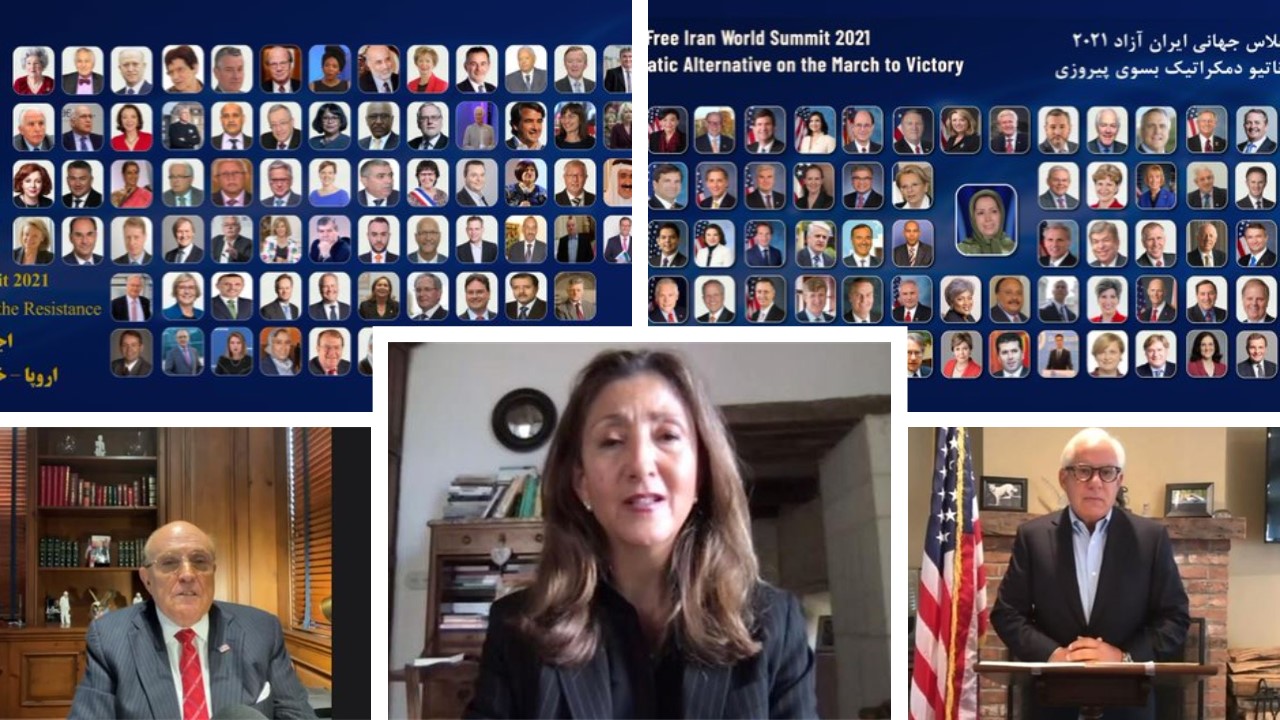 Hundreds of thousands of Iranian ex-pats in 105 countries listened in to a series of live-streamed speeches by high-profile politicians, freedom-loving individuals, and supporters of The National Council of Resistance of Iran (NCRI), and the People’s Mujahedin of Iran (PMOI / MEK Iran), on Saturday, Sunday, and Monday.

Over 1,000 political leaders from the United States, the United Kingdom, the European Union, and the Arab world attended the three-day Free Iran World Summit.

Mrs. Maryam Rajavi, the NCRI’s president-elect, was the keynote speaker at the event. On Saturday, her remarks mostly focused on Iran’s domestic problems and the clerical regime’s weak status, but they also touched on the international community’s inactivity in the face of Iran’s continuous human rights violations and terrorism export.

The Western countries’ relations with the mullahs’ regime

Mrs. Rajavi remarked on Sunday that the Western countries’ relations with the mullahs’ regime have fuelled a vicious cycle of deception and appeasement. In exchange for only minor restrictions on the regime’s nuclear program, the Joint Comprehensive Plan of Action or JCPOA, a good embodiment of that failed strategy, gave away large-scale relief of economic sanctions.

The Iranian regime has never remained true to its commitments under the JCPOA. Furthermore, the government started a nuclear extortion strategy by explicitly breaking the deal after the US declared Iran out of compliance in 2018 and suspended American participation.

The international support for regime change

The international support for that prospect appears to be strong, as evidenced by this weekend’s conference. Many of the important remarks also mentioned changes in Iran that could have a significant impact on Western foreign policy decisions.

Mrs. Rajavi expressly advised lawmakers participating in those decisions on Sunday to approach any future Vienna conversations with the premise that “the mullahs only understand the language of firmness and strength.”

Raisi’s direct promotion from the office of judiciary head by the regime’s Supreme Leader Ali Khamenei was an orchestrated process. Raisi led one of the regime’s deadliest crackdowns on dissent during his more than two years in the previous job, reinforcing his legacy as a perpetrator in a terrible massacre of political detainees carried out in the summer of 1988.

The victims of the 1988 massacre

“For almost 33 years, the world has forgotten 30,000 political prisoners, the victims of the 1988 massacre,” Slovenian Prime Minister Janez Jana said in an address at the Free Iran Summit on Saturday.

This crime must be addressed. The United Nations Commission of Inquiry is critical in bringing light on the atrocious massacre of 1988. This is especially crucial given the fact that Ebrahim Raisi, the regime’s next president, is accused by Amnesty International of crimes against humanity for his role in the massacre.”

The “hostility and enmity” between the two sides

As a result, Mrs. Rajavi predicted during the summit that “hostility and enmity” between the two sides will “intensify more than ever before”.

The international community should stand behind the Iranian people and continue to reject Ebrahim Raisi.