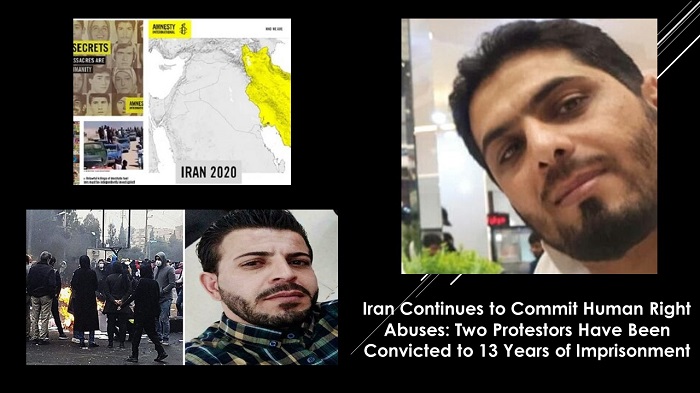 It has been reported by The National Council of Resistance of Iran (NCRI), and the People’s Mujahedin of Iran (PMOI / MEK Iran), that two demonstrators detained during the main anti-regime protests in November 2019 have been sentenced to prolonged imprisonment by Iranian authorities.

The two demonstrators, Jalal Namdari and Saeed Khaledi were sentenced to a total of 13 years in prison for their roles in anti-regime demonstrations that erupted after the regime imposed a sharp rise in fuel prices. Namdari is a Kermanshah native, while Khaledi hails from Paveh.

Khaledi has been sentenced to three years in jail for “acting against national security and cooperating with dissident opposition groups” And another year for “spreading propaganda against the establishment,” according to the court’s decision.

On the other hand, Namdari received a five-year sentence for “acting against the national security and cooperation with the People’s Mujahedin of Iran (PMOI / MEK Iran),.” And another three years for “assembling and collusion for crimes by participating and encouraging people to participate in the November protests.”

The Revolutionary Guard’s (IRGC) intelligence unit apprehended Namdari on December 30, 2020.  He is currently imprisoned in the Diesel Abad prison in Kermanshah. Soon after, Khaledi was arrested and granted bail pending the outcome of the court case.

Human rights abuses against demonstrators detained during Iran’s November 2019 demonstrations are causing increasing concern.  Amnesty International stated in a report released on 3 September 2020 that “during and after the protests, Iran’s police, intelligence, and security forces arrested 7,000 men, women, and children.”

“Amnesty International’s research shows that many of the arrests took place during the five days of protests, but, in the days and weeks that followed, the pattern of mass arrests continued, particularly in provinces that had suffered high death tolls in a context in which the authorities had stationed significant numbers of security vehicles and personnel in public places to deter further protests,” according to the report.

According to information gathered by the MEK, security forces killed at least 1,500 demonstrators and arrested over 12,000 people in the first few days of the uprising. Reuters reported these figures afterward on 23 December 2019.

The European Union placed sanctions on eight elite IRGC top figures on 12 April for their involvement in the violent suppression in the November 2019 uprising.

“Hossein Salami took part in the sessions that resulted in the orders to use lethal force to suppress the November 2019 protests. Hossein Salami, therefore, bears responsibility for serious human rights violations in Iran.”

According to Reuters, “The bloc, which also hit three Iranian prisons with asset freezes, blacklisted Hossein Salami, head of the Revolutionary Guards, the most powerful and heavily armed security force in the Islamic Republic.”

Maryam Rajavi, the President-elect of the National Council of Resistance of Iran (NCRI), welcomed new EU penalties against IRGC officials, emphasizing the need to blacklist the entire IRGC and the regime’s Ministry of Intelligence (MOIS), as well as prosecute, expel, and revoke the passports of its agents in Europe.

“Firmness is the only language Iran’s ruling mullahs understand.”