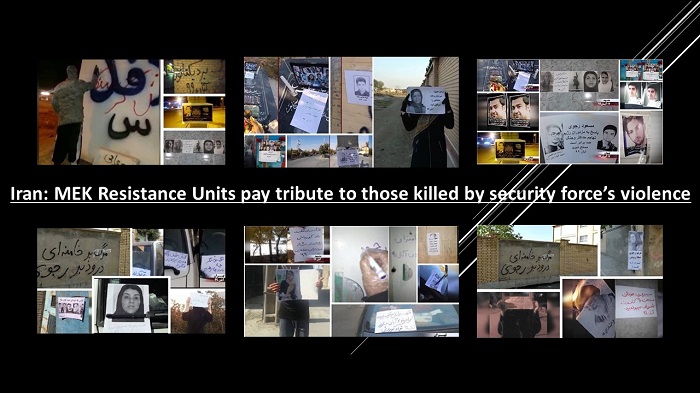 Last year, more than 1,500 people were killed by security forces in Iran during the November uprising. Reuters confirmed in a special report on December 23, 2019, about the deadly crackdown on November nationwide protests in Iran the death toll of 1500 that was announced by the People’s Mojahedin Organization of Iran (PMOI / MEK Iran) on December 15, 2019. Many of the victims were shot at point-blank range by the brutal suppressive forces. Thousands more peaceful protesters were seriously injured with many more dying in subsequent months.

The people now consider 15th November as a day to commemorate the lives of those that were killed during the uprising. In the past few weeks, people have been displaying pictures and images of those that died in cities across the country.

The main opposition to the Iranian regime – the People’s Mojahedin Organization of Iran (PMOI / MEK ّIran) – has been supporting the people of Iran for decades. In recent years, its internal network of MEK Resistance Units has been particularly active, amplifying the voice of the people that are crying out for regime change.

To mark the one year anniversary of the uprising, the MEK Resistance Units have organized a series of anti-regime campaigns and activities. In Tehran, posters of Massoud Rajavi, the leader of the Iranian Resistance, and Mrs. Maryam Rajavi, the President-elect of the National Council of Resistance of Iran (NCRI), have been displayed. These two leaders are widely supported by the people of Iran and their efforts in moving the Resistance movements forward are highly appreciated.

Pictures of the 2019 uprising victims were also displayed in numerous cities including capital Tehran, Karaj, Mashhad, Shahr-e Quds, and Shiraz, to name a few.

Anti-regime slogans and graffiti were also seen across cities. Some of them were calling for justice for the crimes against humanity committed by the regime, including President Hassan Rouhani and Supreme Leader Ali Khamenei. Other slogans were the message of support for the leaders of the Resistance and calls for the people to rise up and “take back our legitimate rights”.

Other slogans called for the destruction of the regime’s suppressive centers and the disbandment of the Islamic Revolutionary Guard Corps (IRGC) and the suppressive Basij force. There were also messages of encouragement for the people such as: “The destiny of Iran will be written by the brave and rebellious people of Iran.”

The people of Iran have made it very clear that they want regime change and that they will not be bullied or threatened into silence. Over the past few years, there have been three major uprisings. With everyone that takes place, the regime gets weaker and weaker.

This is why the regime responded with such violence to the November 2019 uprising. It believed that by cracking down hard on the people that they would abandon the uprising, but the opposite happened – it made the people even more determined to voice their discontent.

As well as the recent activity by the Resistance Units, the people of Iran, in particular the young people, have been targeting suppressive centers across the country. For example, in Isfahan and in Kazerun, suppressive centers were torched. It is certain these activities will continue until the regime falls.