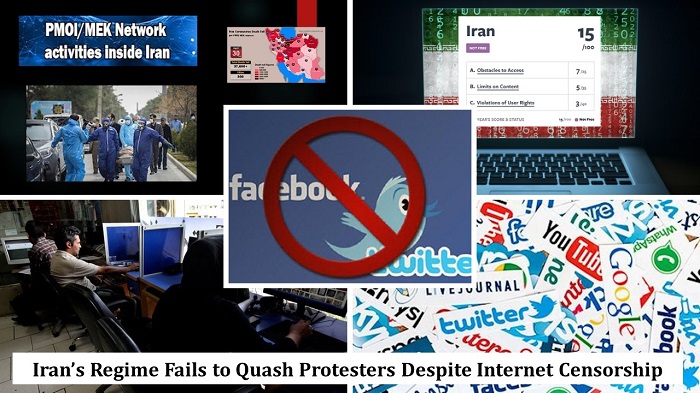 The Iranian regime was quick to start using social media as a means of spreading propaganda and disinformation, even when some social media sites had been barred from use in Iran itself. Recently, the U.S. authorities have shut down 27 websites that have been used as proxies by the regime to tell lies and attack the Iranian resistance, the National Council of Resistance of Iran’s (NCRI), and the People’s Mojahedin Organization of Iran (PMOI / MEK Iran). Twitter has also closed down about 1,600 Twitter accounts with links to the regime. These social media accounts and websites all pretend to come from genuine American or European sources.

Social media have played a great role in the growing MEK resistance movement. Since the massive uprising of December 2017, #MEK has harnessed the power of social media to spread the news of the regime’s corruption and to organize protests and activities. https://t.co/J4vLM70BB2

The use of propaganda is certainly not new in Iran, but it has changed its methods since the mullahs gained power after the Iranian Revolution of 1979.  One of its key targets has been the major Iranian opposition organizations, the People’s Mojahedin Organization of Iran (PMOI / MEK Iran).

The media attack against the MEK followed the mass slaughter of MEK members and supporters in 1988, following the Iran/ Iraq War. 30,000 MEK prisoners were killed and then buried secretly in mass graves. The regime sought to portray the MEK as a spent force after these killings, referring to it as a “terrorist group.”

Although the MEK survived the killings, its reputation was affected by the disinformation campaign waged by the regime. This seriously affected the way European and American governments saw the legitimacy of the regime. The view was that there was no real obvious democratic alternative, leaving international governments no choice but to take the Iranian regime seriously and consider it as the only viable governing option in the country. It wasn’t until 2012 that the MEK lost its “terrorism” status, but by that time much of the damage had already been done.

Meanwhile, social media had become widely used in Iran. The regime may have tried to control access to some sites, but many younger Iranians are very tech-savvy and have found ways of bypassing most of the blocks. At the same time, the regime’s disinformation officials, including the Supreme Leader, Ali Khamenei himself, have taken to using social media and the Internet like ducks to water. These methods of disseminating false information and propaganda have been used both within and outside Iran.

Facebook and Twitter are now more engaged in monitoring fake accounts but have had a hard job detecting all the sites used as proxies by the Iranian regime. Western governments will have to adopt a more sophisticated attitude towards propaganda emanating from Iran in the future, especially if what is coming out from the regime is taken into context with developments within the Islamic Republic.

An online conference organized by the NCRI last Tuesday emphasized the lessons that should have been learned from last year’s November protests, in particular the role the MEK and its internal Resistance Units played in organizing and leading many of the protests.

As far as the MEK is concerned, the events that took place last November are a clear sign that the status of the organization does not resemble anything like the caricature portrayed by the Iranian regime through their propaganda machine. The conference was attended by many European lawmakers who recognize the importance of the MEK, the NCRI, and the 10 point program of the NCRI’s president-elect, Mrs. Maryam Rajavi. The 10 point program is a clearly worded document of intent for the creation of a free and democratic, secular Iran to replace the dictatorship of the mullahs.

The plan envisages free and fair elections, separation of state from religion, freedom of all religions, a ban on the death penalty, and protection of the rights of women and minorities.

The fact that so many people took part in the November 2019 protests is a repudiation of the lies that the regime has tried to spread about the MEK. However, it seems that this has had little effect on the way western policymakers have viewed the Iranian opposition. The fact that 1,500 protesters lost their lives in the protests, slain by Iranian state security forces, and elements of the Revolutionary Guard (IRGC) has had little or no resonance outside of Iran. This may be a testament to the effectiveness of the propaganda and lies spread by Iranian authorities through websites and social media platforms that give the messages a veneer of authenticity.

One of the main conclusions of the Tuesday conference was that last November’s uprising certainly won’t be the last. Dissent within Iran is increasing and the country is at a tipping point. The next set of protests may propel Iran towards regime change. It makes sense for Western governments to understand the dynamics of these uprisings and be ready o support the most likely democratic alternative to the regime in Tehran.