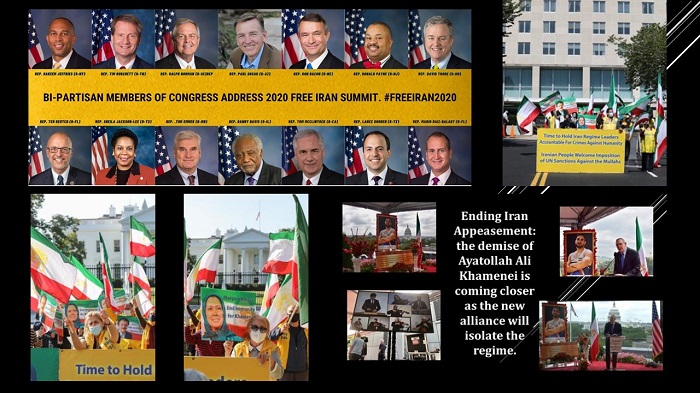 General Jack Keane said in an interview with Iran Freedom that the US people are motivated to support the Iranian people’s courage and they identify with the protesters on Iran’s streets. They support Maryam Rajavi the President-elect of the National Council of Resistance of Iran’s (NCRI) leadership, and what she could achieve if she was president of Iran.

These words were spoken before the latest United Nations General Assembly, at an online international summit, called “Trans-Atlantic Summit on Iran Policy, Time to Hold the Iranian Regime Accountable,” brought together Iranians supporting the People’s Mojahedin Organization of Iran (PMOI / MEK Iran), in various countries around the world from 10,000 locations.

Keane wasn’t the only one who was involved in the international summit, but it attracted 30 US bipartisan lawmakers from both the house and the senate.

They include several well-known names such as

One of the most important contributions made by Maryam Rajavi, the keynote speaker of the summit, was to honor Navid Afkari, a national hero who was recently executed by the regime.

Mrs. Rajavi said the following words: “Faced with executions and massacres, the people of Iran urge the United Nations, and the U.N. Security Council, in particular, to restore snapback sanctions stipulated in the six U.N. resolutions against the clerical regime in Iran. Otherwise, Khamenei will continue to ravage the nation as his regime’s survival depends on murder and suppression in particular anybody related to (PMOI / MEK Iran). If Khamenei were to stop executions, he would lose control of the situation, and uprisings simmering in the depths of Iranian society would erupt and overthrow the mullahs’ religious fascism.”

Most of the summit’s speakers demanded that justice be sought for the murderers of more than 30,000 MEK and other activists who were slaughtered in 1988. The contributors to the summit also demanded an end towards appeasing Iran and how important it is to root out those who killed protesters who are today installed in key regime positions.

Gen. Keane said that the US was inspired by the Iranian people’s rare courage and by Maryam Rajavi’s leadership, and what she will achieve as president of Iran.  He said the US identifies completely with the people who are and have been protesting in the streets of Iran.

He reminded the summit’s participants that over the last 12 months 1,500 Iranians were killed by the mullahs just for protesting against the regime’s tyranny. Presently, 12,000 are in prison and are subject to torture, and Navid Afkari, a well-known wrestler, who last week was murdered by the regime.

Keane said the money to fuel terrorism was coming from the JCPOA and $150 billion had been given to the mullahs to fuel terrorism which had also provided the pathway for holding nuclear weapons. The death of Qassem Soleimani, who was responsible for “Iran’s proxy wars and terror campaigns, was finally killed.” His death served to be a turning point for the leaders in the region to form an alliance against the mullahs. The sentiment now is that the mullahs are now failing Iranians. Khamenei is attempting to initiate a global economic crisis by trying to disrupt the flow of oil, but he has failed.

The #Iranian Resistance Units, which are linked to the #MEK, continued their anti-regime activities for three days last week, calling for regime change and public support for the MEK. #FreeIran2020 pic.twitter.com/glY14WMcCO

Iranian people are now following the path to regime change and this can be seen in local protests through the slogans that ring out up and down the streets by Iranian youth supporters of the MEK and resistance units.

Keane, speaking on the behalf of the U.S., says the country completely identifies with the people who are out on the streets of Iran protesting.