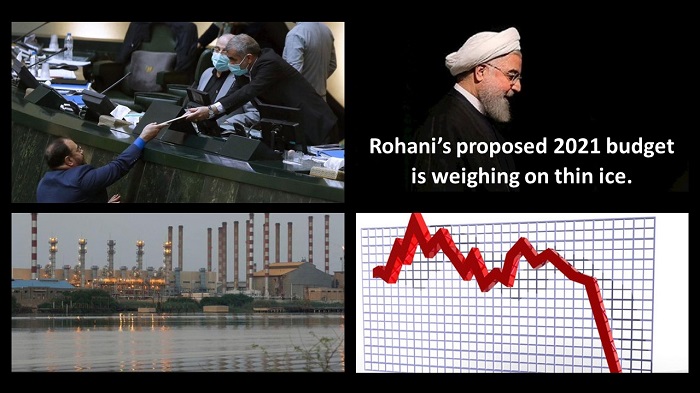 On 15 March, the National Council of Resistance of Iran (NCRI), and the People’s Mujahedin of Iran (PMOI / MEK Iran), reported the Majlis (Parliament) accepted the 2021 budget after months of disputes only to be dismissed with a total of 60 objections by the Guardian Council.

Abdolnasser Hemati, head of the Central Bank of the Regime, declared urgently that the changes to the budget would only raise inflation and liquidity.

The state-run Eghtesad News, on 7 March wrote, “The head of the central bank believes the approved budget figures will result in the strong growth of printing money and liquidity.”

The 2021 Budget compelled the Central Bank to inject rials into the market to prevent contraction, added another economist of the regime in a piece on 8 March by the Tasnim News Agency. “Next year, the Central Bank will be forced to take steps to deal with the budget deficit, which will further exacerbate inflation.”

According to an economist in an interview with the Shahr-e Khabar website on 10 March, “A 74-percent increase in next year’s budget has thwarted all of the central bank’s efforts to control inflation and will only cause more inflation next year.”

The Chamber of Commerce of the regime is also concerned about the prospects of Iran’s economy and the budget for the upcoming months. “The 2021 budget will only cause more inflation and the increase of currency,” declared the head of Tehran’s Chamber of Commerce.

According to the head of Tehran’s Chamber of Commerce, “2020 was the worst year in terms of public confidence in the country’s economic policies. The GDP growth between March and December 2020 was an average of 1.2 percent negative. We have a difficult path to achieve GDP growth of 2017 since it has been negative over the past two years.”

The 2021 budget was based on the sale of 2,3 billion barrels of oil per day. However, In the past year, no more than 700,000 barrels a day have been sold, and even so, it has been done on cargo containers where the rates are cheaper than those on the market.

Hassan Rouhani’s government expects to gain 2.5 trillion rials from sales of 2.3 million barrels a day (about $60 trillion in official exchange rates). However, the revenues in the 2020 budget were half of those figures. There is no clear indication that the regime’s petroleum industry will be lifted with international sanctions and with the spread of the Covid-19 outbreak that has seriously impacted the oil market.

Rouhani’s government also based part of its budget on 2,500 trillion rials of tax spending. Most manufacturing companies are now at the edge of collapse and recession. Many workers have received no wages or are unemployed.

Previously the regime has announced that the GDP growth has decreased by 5.4 and the year before with 6.5 percent even though the 2017 official inflation rate was above 30 percent.

The devastating economic climate is the outcome of the political mismanaging of the Mullahs. The regime aims to protect its establishment at all costs and make its forces feel confident. The several inconsistencies in the 2021 budget deficit regime, however, represent a severe financial crisis.