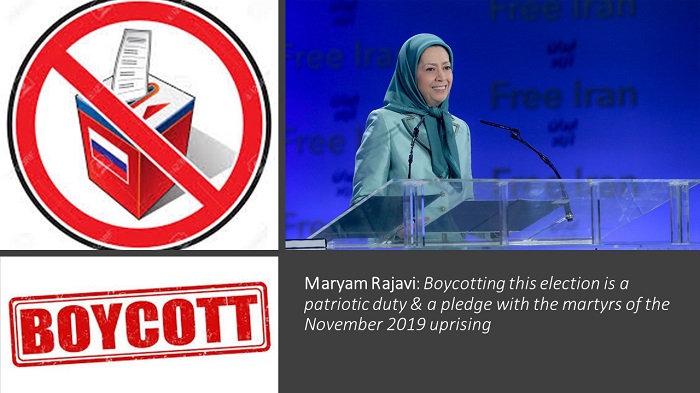 According to the reports by The National Council of Resistance of Iran (NCRI), and the People’s Mujahedin of Iran (PMOI / MEK Iran) the boycott of Iran’s presidential election has gained popularity in international news outlets. Even some Iranian official media have projected that voter turnout could break a record low established only 16 months ago in the country’s most recent parliamentary election.

Several reports in the United States and Europe seem to blame voter apathy on a lack of viable candidates on the ballot, as well as growing dissatisfaction with the economy and a slew of corruption.

Raisi was appointed to the position of head of the country’s judiciary by Supreme Leader Ali Khamenei in 2019. The Guardian Council is in charge of safeguarding Khamenei’s power by conducting background checks on aspirants for high office. But only seven of the roughly 600 candidates who initially registered were denied candidacy this year. The Council left Raisi no rivals on the basis that Khamenei had chosen Rouhani’s successor.

Raisi oversaw the early attacks on activists in the November 2019 uprising, as well as the interrogation and torture of thousands of activists imprisoned during and after those events as the head of the judiciary.

More than 1,500 people were massacred and at least 12,000 were arrested throughout that uprising. Later, Amnesty International issued a report claiming that the torture of those detainees began right away and lasted for several months.

The abuse seemed to validate what Raisi’s initial behavior as court chief had already suggested: that Iran had entered a time in which repression of opposition would be more intense than it had been for years, if not decades.

Raisi’s background is defined, above all, by his leadership participation in the massacre of 30,000 political prisoners in the summer of 1988, the bulk of them were members and sympathizers of Iran’s organized opposition, The National Council of Resistance of Iran (NCRI), and the People’s Mujahedin of Iran (PMOI / MEK Iran).

Raisi is responsible for a significant number of these mass killings as a member of the Tehran “death commission” that questioned political prisoners about their connections before sentencing them to death in a matter of minutes.

Iranian people are fully aware of this, and most perceive Raisi’s nomination as a symbol of the regime’s support of not just the recent crackdowns on protestors, but also of a slaughter that has been defined as a crime against humanity and one of the worst atrocities in contemporary Iranian history.

This isn’t a minor point in the context of potentially record-low voter participation. It’s an indication of far more than just disapproval of this election.  It’s indeed, a complete rejection of the government. It will ultimately be an indication of sustained support for the 2018 and 2019 uprisings’ message of regime change and democratic governance as an alternative to the current theocratic tyranny.

The international community must be aware of this and change its appeasement policy toward Iran.   All western powers will have to decide shortly whether or not to support the Iranian people in their fight against their oppressive government.