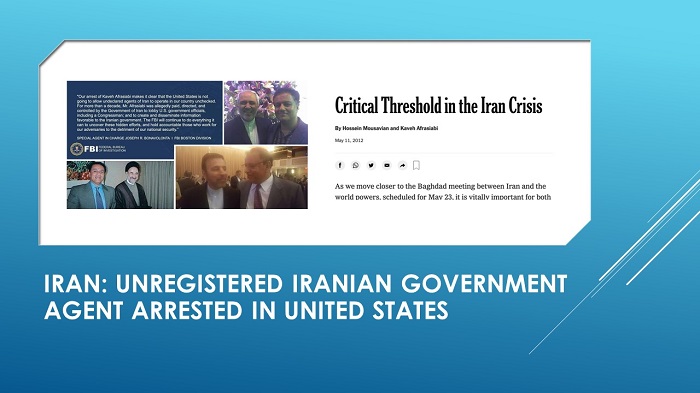 Kaveh Lotfolah Afrasiabi, a political scientist that has been published by major media outlets including The New York Times, has been arrested on the charge of acting and conspiring to act as an unregistered agent of Iran. The arrest was announced by federal authorities last month.

Acting U.S. Attorney DuCharme said that Mr. Afrasiabi was seeking to “influence the American public and American policymakers for the benefit of his employer, the Iranian government, by disguising propaganda as objective policy analysis and expertise”.

Attorney DuCharme said that the United States is committed to ensuring that the Foreign Agents Registration Act is enforced, explaining that it has the purpose of giving the people of America what they need to “evaluate opinions and arguments in the marketplace of ideas by requiring foreign agents to declare their paymasters”. He said that those who did not reveal the full extent of their work will face consequences for concealing vital information from the public.

Mr. Afrasiabi has had significant influence in the media over the past ten years and more. Just a few years ago, he co-authored an opinion piece in The New York Times in which he encouraged Iranian President Hassan Rouhani and the-then President Donald Trump to meet. He was described by the publication as an adviser to Iran’s nuclear negotiation team.

Assistant Attorney General Demers said that Mr. Afrasiabi introduced himself to influential lawmakers, journalists, and the public as someone that had no interest in either side. He said Mr. Afrasiabi “pitched himself (…) as a neutral and objective expert on Iran” when in actual fact he was “a secret employee of the Government of Iran (…) who was being paid to spread their propaganda”.

The U.S. Attorney’s Office has said that Mr. Afrasiabi has been paid around $265,000 and given health benefits by Iranian diplomats that were assigned to the Permanent Mission of the Islamic Republic of Iran to the United Nations in New York City (IMUN).

Assistant Attorney General Demers emphasized that the charges against Afrasiabi are serious and that he must be held to account for evading “his obligation to disclose who was sponsoring his views” and for deliberately not registering with the Department of Justice as he should have done according to the Foreign Agents Registration Act.

If convicted, he will face a sentence of up to ten years imprisonment.

This is, unfortunately, not an isolated case. The Iranian regime has agents spread all over the world and many of them have not been caught or even questioned, despite their extreme pro-regime views.

the National Council of Resistance of Iran’s (NCRI) and the People’s Mojahedin Organization of Iran (PMOI / MEK Iran) analysis says in this day and age, it is absolutely essential for reporters to do their due diligence and fact-check and do background checks, especially when it comes to the Iranian regime. It cannot be trusted and its lobbies and lobbyists around the world are pushing a very malign agenda. Of course, some will slip through the net, but overall greater efforts need to be taken. Hopefully, the arrest of Mr. Afrasiabi will serve as a reminder.