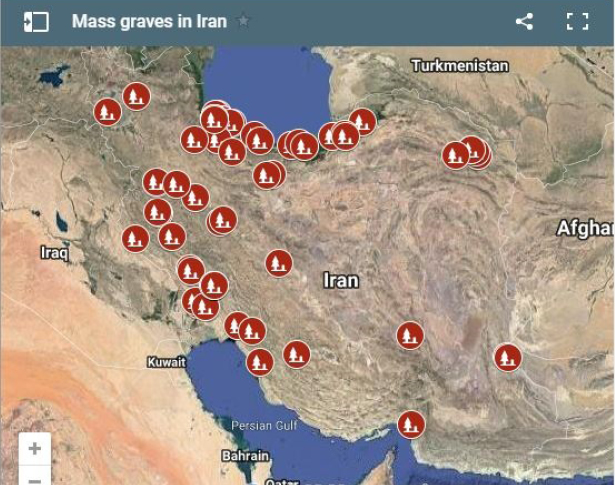 Plans have been reported that outline the regime’s implementation of plans to destroy the sites of mass graves in Khavaran Cemetery. This is a patch of a larger quilt of destruction by the regime, where the evidence of the 1988 massacre of political prisoners is destroyed. The decimation of these graves will also affect nearby graves of Baha’i Iranian’s, forced to bury their dead in Khavaran.

The US and Amnesty International released reports in 2017 that detailed the destruction of the martyrs’ graves, Amnesty International reiterated the point that the destruction of this evidence threatened to prevent the regime from being held fully accountable for the death toll of the massacre. The People’s Mojahedin Organisation of Iran (PMOI / MEK Iran), the democratic group targeted by the massacre, maintain upwards of 30,000 people were hanged by “death commissions”, intent on destroying opposition to the regime.

The UN report on the Situation of Human Rights in Iran in 2017 outlined that in March of that year, the families of the martyrs visited a burial site in Mashhad “where up to 170 political prisoners are believed to be buried” and found that “the previously flat area had been covered with soil to create a raised mound over the grave.

In mid-May, bulldozers were reportedly seen working on a construction project directly alongside the mass grave site at Ahvaz… where the remains of at least 44 people killed during the summer of 1988 are believed to be located.”

By putting former 1988 death commissioners in positions of power, like the head of Iran’s Judiciary and the regime’s Minister of Justice, they can quell protests and dissent from the MEK. This was seen at the beginning of 2018 and the end of 2019 during two large-scale uprisings attributed to the MEK. The first of which was ended through dozens of deaths, with the Islamic Revolutionary Guard Corps opening fire on a crowd and killing around 1,500 peaceful protestors.

Criticism can be directed at the Western policies imposed on Iran, which often describe these killings as having been enabled by the regime’s sense of impunity stemming from the continual lack of international response to previous human rights abuses, including the 1988 massacre.

Madam Maryam Rajavi, President of the National Council of Resistance of Iran (NCRI) tweeted her previous speech about the 1988 massacre on the 25 April, “One of the most harmful consequences of the policy of appeasement was providing impunity to the ruling murderers, whose crimes started in the early 1980s, reached new heights during the 1988 Massacre and have continued to this day.”

Burial sites of the massacre have been identified in at least 36 cities, and it is unknown how many have been destroyed since their discovery. It is also unknown, however, how many were destroyed prior to discovery.

Amnesty International and other human rights defenders have repeatedly noted that there is little doubt that the destruction will continue for the foreseeable future unless confronted by internal and external forces.

The UN experts prompted Amnesty International to declare their letter as a “momentous breakthrough” and a “turning point”. However, whether the UN as a whole will follow through, and whether leading member states will push for accountability of those who oversaw the 1988 massacre and its cover-up, remains to be seen.