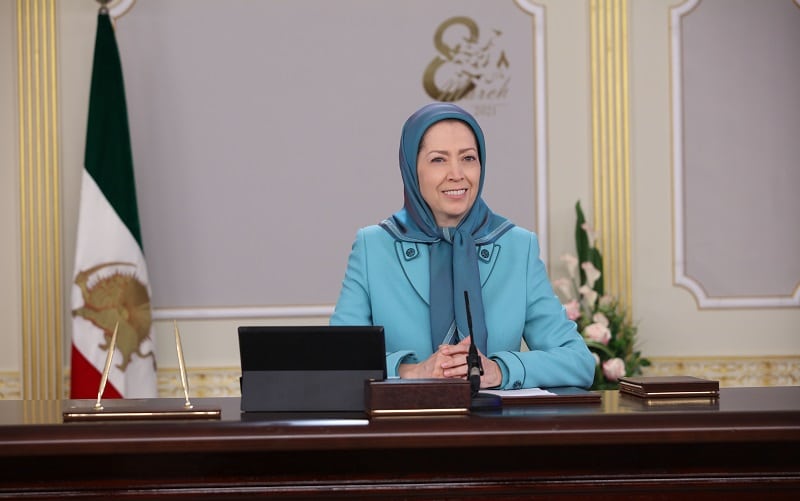 On 7 March, Mrs. Maryam Rajavi, President-elect of the National Council of Resistance of Iran (NCRI), said on the resistance’s satellite TV, Simay-e Azadi, in her message on International Women’s Day (INTV), “Women of Iran can and must win the victory.”

“Today, Covid-19, poverty, and oppression have given a bleak and dismal appearance to our cities and villages; but below this darkness, the Iranian women’s determination to achieve freedom and equality, and to change political and social dynamics has rekindled the flames of hope… Today, it is not the mullahs’ missile or nuclear programs or Khamenei’s Revolutionary Guard Corps, but the people of Iran and particularly the women of Iran who will change the equation in Iran.” Rajavi’s message continues to follow.

“So, this year, International Women’s Day delivers a commitment for Iranian women. The commitment is that they can and must break through the calamity of Coronavirus, repression, and poverty, and win freedom and equality,” Mrs. Rajavi recapitulated.

The all-women Central Council of the People’s Mojahedin Organization of Iran (PMOI / MEK Iran), which is leading another national uprising against the mullahs’ tyrant of intimidation and misogyny, exemplifies this potential.

“They have deployed various kinds of weapons to contain this flourishing and progressive force, including inhuman discriminations, to suppression and constant control, to pushing millions of women towards poverty.”

“Yet, the force of rebellion of that blood-drenched and fiery uprising in November 2019 lurks in the heart of Iranian society and erupts like a storm or a roaring flood at every opportunity.” “And again, it is the women of Iran who are standing in the eye of the storm in every upheaval and in every uprising.”

“This is why the mullahs are terrified of the force of women’s resistance.” added the leader of the opposition.

In her IWD2021 message, Maryam Rajavi outlined some of the most critical matters concerning Iranian women and Iranian Society.  Mrs. Rajavi also examined the rights that women must have, before encouraging Iranian women to stand up and spread the rebellion against the mullahs.

“No force can stop the overthrow of the mullahs. The objective conditions and the circumstances for a revolution are in place. They must be accelerated and guided towards freedom with your enlightened and fighting force led by your vanguard sisters in the People’s Mujahedin of Iran (PMOI / MEK Iran).”

Iranian women have learned over the years that in the face of suffering, deprivation, violence, and injustice, they must stand up rather than being passive and introverted. Any barrier, limitation, and injustice imposed by the regime on women have become an opportunity for women to become empowered.

“You are the ones who can encourage the restless youth in Iran to form their Resistance Units. Support them in any way possible. Shoulder the responsibility of inciting and advancing the uprising. Your suffering and efforts build the bridge to freedom, and on the other end of this bridge, again it is you, women who will emerge as leaders of a free and equal society.”