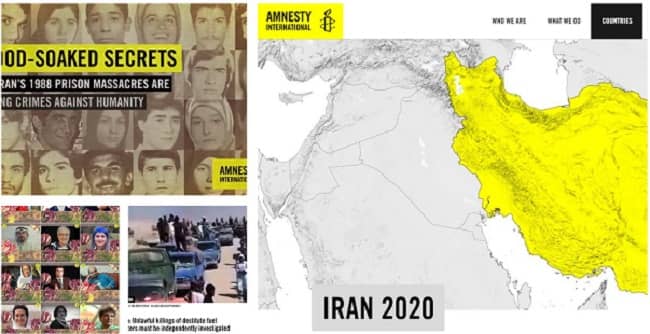 Amnesty International recently released its report on the state of the world’s human rights. The report spans 149 countries and a wide range of issues, many of which remain unsolved.

The National Council of Resistance of Iran (NCRI), and People’s Mujahedin Organization of Iran (PMOI / MEK Iran) report that within this category, the 1988 massacre of Iranian political prisoners, described as one of the worst crimes against humanity in the latter half of the 20th century, remains prominent. International discourse seems reluctant to address this crime and hold the offending regime accountable.

“Death commissions” began assembling in prisons throughout Iran in May of 1988, to interrogate political prisoners about their attitudes towards the theocratic system. Those who failed to demonstrate loyalty and compliance to the regime were executed.

Then-supreme leader Khomeini declared in a fatwa (a religious decree) that anyone associate with the Mujahedin-e-Khalq (MEK) was guilty of enmity against God and must be executed.

This same vague charge has been used to justify the barbaric punishment of dissidents. According to Amnesty International reports “several protesters were sentenced to death following unfair trials which relied on torture-tainted ‘confessions.”

This is not surprising considering one of the leading figures in the 1988 massacre, Ebrahim Raisi, is now the head of the Iranian Judiciary. Raisi has reportedly seen the escalating focus on dissenters, with Amnesty International’s previous report on this called “Trampling Humanity”.

This report focussed on the pervasive torture meted out to protestors that were arrested during the nationwide uprising of November 2019. Amnesty International reports “authorities continued to cover-up the real death toll” from instances where the Islamic Revolutionary Guard Corps (IRGC) opened fire on a crowd of protesters.

From intense investigations, the MEK has deduced that the security forces fatally shot around 1.500 protesters during the November 2019 uprising.

Whilst a huge loss, that death toll is dwarfed in comparison to that of the 30,000 political prisoners (included pregnant people and teenagers as young as 13) killed in 1988.

The lack of a serious international response to either of these incidents enables the regime to punish dissenters with more violence, especially if the crippled economy and the effects of the pandemic stir another uprising.

The massacre of 1988 and the killings in 2019, highlight the distinct danger the Iranian people face. The danger is amplified by international bodies’ refusal to acknowledge those acts of violence and hold Raisi, or other regime officials accountable. Many of these violent offenders still hold influential posts in the regime.

In 2020, seven senior United Nations human rights rapporteurs acknowledged this international failure. “The failure of these bodies to act had a devastating impact on the survivors and families as well as on the general situation of human rights in Iran” the letter stated.

The UN rights experts called for an international investigation in the 1988 massacre. Biden’s administration has communicated its commitment to worldwide human rights and must center it as it pertains to Iran. If the administration cannot do this, and the UN security council does not launch an independent inquiry into the 1988 massacre, the regime can continue its human rights abuses and the Iranian people continue to suffer.