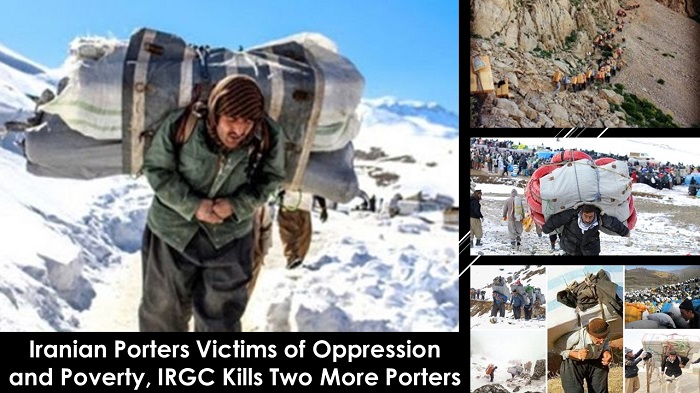 The Revolutionary Guards (IRGC) have shot and killed two border porters (kolbars) in the northwest and southeast Iran so far this month.

Many people turn to the physically grueling job of porter because unemployment in the border regions is so high, which itself is the result of biased regime policies. The porters must carry heavy loads for hundreds of kilometers, across mountains and deserts, risking their lives in numerous ways, including freezing to death, as 14-year-old Farhad did in December 2019, causing locals to come out in protest against a regime that forces children to work dangerous jobs to escape poverty.

The freezing to death of a 14-year-old porter in the mountains of #Iran shocks every human being. Instead of going to school, Farhad had to carry heavy loads and work as a porter to earn a living.

At the time, Mrs. Maryam Rajavi, the President of the National Council of Resistance of Iran (NCRI),  said: “The freezing to death of a 14-year-old porter in the mountains of Iran shocks every human being. Instead of going to school, Farhad had to carry heavy loads and work as a porter to earn a living. The clerical regime plunders the wealth of the people of Iran or wastes it on war and suppression. Children of the regime’s leaders are living lavish lives in Europe and the U.S. while deprived Iranian children have to work as porters. The deprived children of Iran have to work as porters and freeze in the mountains in fear of being pursued by the IRGC. These deprived children are the very forces of the MEK Resistance Units and the rebellion who will uproot the mullahs’ rule.”

Far too many die at the hands of the IRGC, who target them without warning under the pretext of fighting smuggling. The reality is that the IRGC controls a huge smuggling network, with the NCRI reporting in 2017 that they’d “taken full control over large portions of Iran’s imports/export”. So the regime isn’t trying to fight to smuggle but rather eliminate the competition.

This forms part of the regime’s domestic oppression policy, where they rely on intimidation to keep control, rather than solving the problems of the people. The people have never accepted the regime’s rule and instead conducted uprisings that came to a head in November 2019 and would have continued if not for the pandemic.

International inaction on the regime’s oppression of its people emboldens them to continue human rights violations, so the world must hold the regime to account and end the mullahs’ crimes against humanity.

The Only Way to End the mullahs regime’s ongoing human rights violations is the regime change. The People’s Mojahedin Organization of Iran (PMOI / MEK Iran), and the National Council of Resistance of Iran (NCRI), working hard and making sacrifices to mobilize the peoples for regime change in Iran.