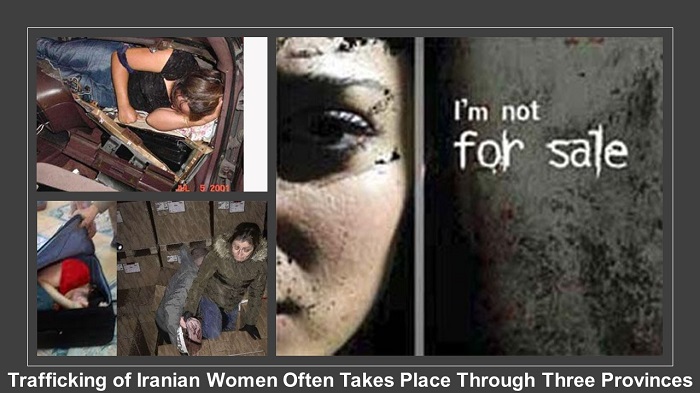 The Women’s Committee of the National Council of Resistance of Iran the trafficking of female Iranians is being ignored in the broader context. Most Iranian victims of human trafficking are female and have been smuggled through the provinces of Hormozgan, Sistan and Baluchestan, and Khuzestan.

Lawyer Hossein Komeili remarked, “In Sistan and Baluchestan, where forced marriages are common, women are given to men in Afghanistan and Pakistan.”

Speaking of the three provinces and “organized trafficking,” Komeili stressed that “corruption in the bureaucracy” and cooperation between “smugglers and the police” have worsened the issue in Iran.

No Statistics can be accessed on this however as the regime refuses to be transparent on the subject of human trafficking, especially that involving women and girls.

The state-run ROKNA news agency said on 3 April; “Women are trafficked under the pretext of finding a job and so on. When they enter transit countries like the United Arab Emirates, it is not possible to go on to countries like Canada or European nations, and these women engage in prostitution”.

As far as its international reputation, the US Department of State publishes an annual human trafficking report. The 2020 Trafficking in Persons Report notes “the Government of Iran does not fully meet the minimum standards for the elimination of trafficking and is not making significant efforts to do so; therefore, Iran remained on Tier 3.”

Countries in Tier 3 consist of those who do not make a visible concerted effort to combat their human trafficking problem. Iran in particular seems to have human trafficking networks completely immune to prosecution.

Women’s departure from Iran may be legal or otherwise however after Iranian women enter Turkey, the UAE, or other regional nations, they may intend to enter developed nations. However, in the process of this, their documents are confiscated and sold.

Iran trafficking of women and girls is extremely organized when sending them to Arab countries of the Persian Gulf. Several reports even mention the Islamic Revolutionary Guard Corps (IRGC) involvement.

Hard-line strategist, Hassan Abbasi, exposed the trafficking of Iranian women to these countries in the Persian Gulf in 2008. In turn, Abbasi condemned the relevant state officials and institutions; the President, the Minister of Information, The Expediency Discernment Council, the IRGC, the Bassij, the head of the judiciary, the commander of the State Security Force, and the Mayor of Tehran- for failing to confront the issue, hold anyone accountable and prevent further tragedy.

“The situation of our Islamic system has reached the point that Shi’a girls are being auctioned off in the UAE,” he said.

The increase in the human trafficking of women and girls in Iran is a direct result of poverty.

“Human trafficking is rampant when people are suffering from poverty, especially in the lower parts of the city.”

Komili concluded, “Therefore, the principal reason for human trafficking is poverty, and victims fall into traffickers’ traps thinking they are finding jobs. Laws must be changed, and the victim must not be seen as a criminal.”

Another grim variant of human trafficking is organ trafficking. Many victims, especially children are sent to transit or destination countries for holding until organs and blood can be removed for sale.

The regime is egregiously benefitting from the trafficking and, as a result, facilitates the human trafficking gangs. The regime will continue to benefit from sexual slavery, both home and abroad.