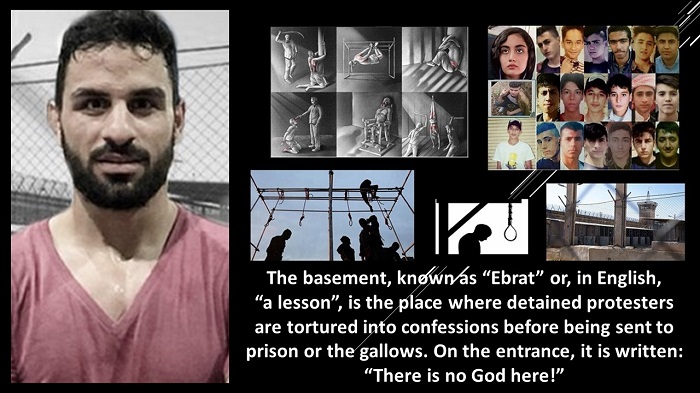 The basement of the Central Prison of Shiraz (Adelabad Prison), where protester and champion wrestler Navid Afkari spent his last days, is a literal torture chamber run by the Revolutionary Guards’ (IRGC) Intelligence division.

The basement, known as “Ebrat” or, in English, “a lesson”, is the place where detained protesters are tortured into confessions before being sent to prison or the gallows. On the entrance, it is written: “There is no God here!”

The basement of the Adelabad Prison, is where #Iran’s wrestling champion #NavidAfkari spent his final days before being executed. The notorious basement of the prison is also called “Ebrat” which literally means “a lesson.” https://t.co/Nosx01Vj6x

While most people held there took part in the November 2019 uprising, it could have been any protest that saw them arrested. It is reported that all those injured by security forces during the November 2019 protests were dragged from hospitals and taken to Ebert, along with protesters arrested in Tehran, Isfahan, Behbahan, Sanandaj, Karaj.

Of course, the IRGC tries to prevent the names and identifying details about prisoners from leaking, so that international organizations cannot lobby on the behalf of those being harassed, violated, and far too often killed under torture.

The guards who torture the detainees are also trying to prevent their names from leaking, so they call themselves by titles, like “left-handed Jalal”, “Godless Majid”, and “shameless Hussein”.

From the beginning of the November 2019 uprising, the People’s Mojahedin Organization of Iran (PMOI / MEK), tracked the deaths – compiling names of those that died. In December 2019, the (PMOI / MEK) reported that more than 1,500 protesters had been killed by the IRGC forces.

Some of the physical tortures:

These are all designed to extract false confessions, but the psychological tortures caused by prison conditions are often worse.

Iranian Minister of Propaganda Javad Zarif returns to the stage at @CFR_Org – again. Seems they never get tired of re-runs. Think Zarif will answer why the Iranian regime hangs gays, stones women, and murders protesters *this* time? Here are a few #QuestionsforZarif.

Not only are roughly 400 protesters crammed into cells where they have at most 1 meter squared of space, but the hygiene conditions are appalling, with only a hole as a toilet and no bath or shower. If prisoners wish to wash, they can have a cold shower in the yard, whilst being hit with the hose by guards.

These conditions make it easy for the coronavirus to spread, but they are also denied medical care as a matter of course.

They are banned from speaking to each other and can have their food ration cut for talking, while they are also not allowed to use the phone to talk to anyone outside the basement walls.

Iran Human Rights Monitor wrote: “[We call] on the UN human rights bodies and all international human rights organizations to form an international delegation to visit prisons and detention centers in Iran. They should particularly demand to meet with the detained protesters and take effective measures to secure their release.”

Mrs. Maryam Rajavi the President-elect of the National Council of Resistance of Iran’s (NCRI): In one of his last messages referring to his struggle against the clerical regime, Navid Afkari said that he is fighting against the most ruthless adversary in human history.

In one of his last messages referring to his struggle against the clerical regime, #NavidAfkari said that he is fighting against the most ruthless adversary in human history. #Iran pic.twitter.com/VjJNJoGoAw