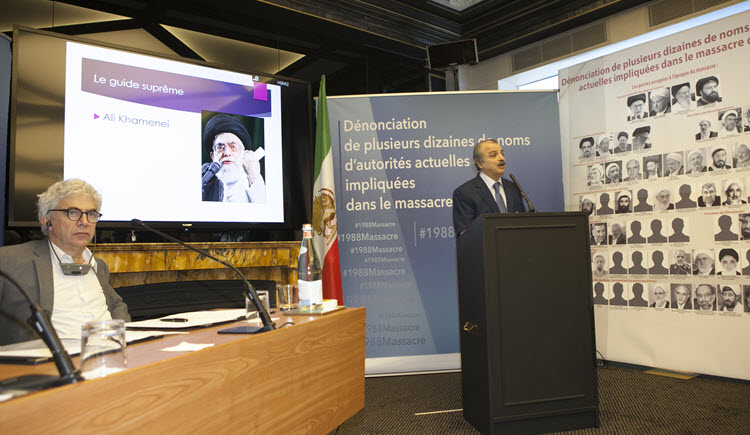 In a September 7 article by Fayçal Benhassain in CNS News, he writes that Iran’s supreme leader, and a former Iranian president, stand accused of involvement in the mass executions of imprisoned dissidents nearly thirty years ago.

In a press conference held Tuesday in Paris the National Council of Resistance of Iran/People’s Mujahedeen Organization of Iran (NCRI/MEK), made public the names of government officials and other prominent Iranians who were allegedly involved in the massacre.  They said that Supreme Leader Ayatollah Ali Khamenei and former President Hashemi Rafsanjani were involved with the mass killings.

Last month, Ahmad Montazeri, the son of Hossein Ali Montazeri, a senior ayatollah, released an audio recording of a meeting between his father and members of a “death commission”.  In the audio, Montazeri can be heard criticizing the executions that were carried out in 1988, during the tenure of Ayatollah Ruhollah Khomeini.  He said, “Killing is the wrong way to resist against ideas.  It is in my opinion the greatest crime committed during the Islamic Revolution for which history will condemn us.”

Montazeri was to have been Khomeini’s successor until he followed his conscience and expressed his opposition.  Instead, the supreme leader post went to Khamenei, and Montazeri was placed under house arrest until his death in 2009.

Mohammad Mohaddessin, chairman of the NCRI’s foreign affairs committee, said at Tuesday’s press conference, that the massacre occurred mostly in the weeks after a fatwa was issued by Khomeini.  “A death commission was created in Tehran and in 10 other Iranian provinces to conduct the fatwa,” he said. “Until now only the names of the members of the death commission in Tehran had been exposed, since Khomeini himself appointed them.  Now we have more names of members involved in the massacre and we are making them public.”

According to Mohaddessin, they included Khamenei, who was president and a key regime decision-maker at the time, along with Rafsanjani, who was parliamentary speaker, and went on to serve two terms as president.  Since then, and continuing to today, Rafsanjani heads the the Expediency Council.

Mostafa Pourmohammadi, President Hasan Rouhani’s minister of justice, is implicated in the “death commissions,” as well, according to the information released and corroborated by the Montazeri audio recording.

The NCRI/MEK seemed to be the main targets of the mass executions, whose victims included 62 pregnant women and 789 minors, said Mohaddessin, who also said that the NCRI/MEK hopes that the next U.S. president will have a change of policy towards Tehran after the revelations about the 1988 executions.  “We really hope that the U.S. attitude will change and that next administration will be more determined against Rouhani’s regime,” Mohaddessin said. “President Obama conducted a politic of moderation toward Iran but it did not work out.”

“This regime is more brutal than the former ones,” Mohaddessin alleged. “Just have a look at its involvement in the Middle East. Look at what is happening in Iraq, Syria and other countries in the region where Tehran is deeply involved.”

The NCRI’s French lawyer, William Bourdon, said that he  hoped the revelations within the new information would draw the attention of the international community. “It is time that the United Nations, for instance starts, looking at the 1988 massacre by the Iranian regime,” he said. “And the truth about these crimes is now known worldwide.”

“We are now calling upon the international community in order to take actions against the Tehran regime.” He believes there is enough proof of the involvement of Iran’s highest authorities to lead other countries act as well.

Khomeini’s described the MEK as “treacherous monafeqin [hypocrites] who do not believe in Islam.”

In recent, shocking news, Ahmad Montazeri was interrogated and reportedly charged with national security offenses after the audio file was published on a website run by supporters of his late father last month.