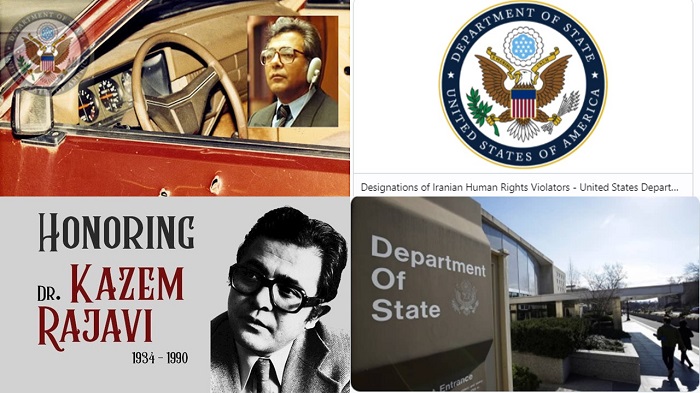 Dr. Kazem Rajavi was a famous jurist and Iran’s first ambassador to the United Nations in Geneva following the 1979 revolution. He was also the older brother of the Iranian Resistance Leader Massoud Rajavi. He was the representative of the National Council of Resistance of Iran (NCRI) in Switzerland and was always respected as a defender of human rights.

Unfortunately, he was assassinated by the Iranian regime’s terrorists in Geneva on April 24th1990.

Restrictions for visas issued by the U.S. Department of State

14 Iranian regime terrorists, including 13 so-called diplomats involved in the assassination of Dr. Kazem Rajavi, will now not be able to get visas to enter the United States.

US @StateDept names the 13 terrorists from Iran who will face new visa restrictions for the 1990 terrorist assassination of Kazem Rajavi. #DisbandIRGC https://t.co/x2ldlkhmQd

Kazem’s campaigned to stop the execution of Massoud Rajavi

Kazem, acting as a renowned jurist and politician in Switzerland, lobbied several organizations and politicians to pressurize the Shah’s regime to withdraw Massoud’s death penalty and to release political prisoners. Francois Mitterrand, the leader of the French Socialist Party was involved in these demands.

In 1976, Kazem Rajavi also created the “International Association of Families of the Political Prisoners in Iran.” Eventually, after further pressure on the Shah, Massoud Rajavi’s death penalty was turned into a lifelong prison sentence.

The assassination of Mohammad Hossein Naghdi, the #NCRI representative in Italy. In Switzerland,the assassination April 24,1990 of Pro Kazem Rajavi who was the first ambassador of Iran post revolution at the U.N.#IRGCTerrorists #BlacKListMOIS #BlodkIRGB @SecPompeo @USAdarFarsi pic.twitter.com/shJcT7EzVl

Ambassador to the U.N.

After the 1979 revolution which ousted the Shah, Kazem Rajavi went back to Iran. He was subsequently appointed as Iran’s ambassador to the United Nations Headquarters in Geneva in 1979. In 1981, after Khomeini’s tyrannical repression against all opposition groups, he stood down from his position.

In 1983, as the special envoy of the President of the NCRI, Kazem went to the U.N. General Assembly where he lobbied for a special envoy to be appointed to pursue human rights violations in Iran. A famous quote from Kazem was “We write the history of human rights with our blood.” Because he was so instrumental in exposing human rights violations the regime supreme leader Ruhollah Khomeini issued a fatwa for his assassination. Finally, on April 24, 1990, he was assassinated by agents of the notorious Iranian regime’s Ministry of Intelligence and Security (MOIS) who were given permission to enter Switzerland and hurriedly returned to Iran on the same day.  The People’s Mojahedin Organization of Iran (PMOI / MEK Iran) has all the details of the assassination but the Swiss judiciary has refused to pursue the case as they are afraid more terrorist activities may take place.

.@A_Jafarzadeh: The U.S. State Department has designated 13 Iranian regime terrorists for their role in the assassination of Dr. Kazem Rajavi, the former representative of the NCRI in Geneva.#IranSanctions #UNSC #DisbandIRGChttps://t.co/ZP6IjFlcjw

30 years later the Prosecutor for Vaud Province in Switzerland said the case was closed due to the “statute of limitation.” The Iranian Resistance filed an objection, so the Swiss judiciary is still keeping the case open.

NCRI President-elect Mrs. Maryam Rajavi supports the designation of 14 regime officials and said it was one way that would ensure security for Europe.  She also stressed that delaying prosecution, and punishment of Dr. Rajavi’s assassins by European countries has cost far too many lives and has lengthened the mullahs’ rule.

The abridged version of an article written by Mahin Horri writing for the MEK.