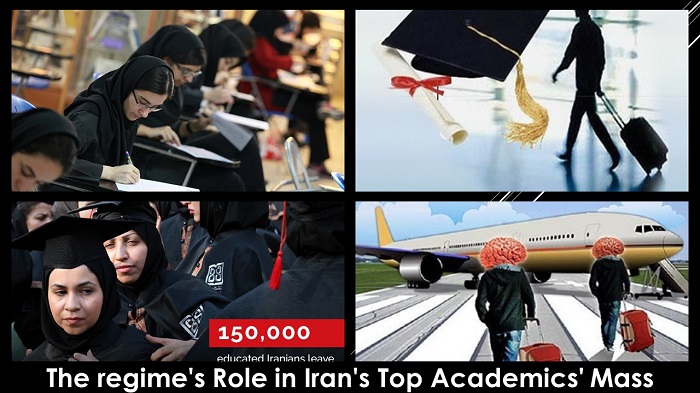 Iran has been devastated by the mullahs’ rule since it assumed power in 1979. The mullahs’ poor policies have resulted in a major skills shortage, in addition to plundering national wealth, oppressing people, and forcing them into misery.

The regime has put the country’s top academics and experts under such coercion and poverty that they have no choice but to migrate. The skills shortage from Iran is growing every year. Between 150,000 and 180,000 professionals and university elite professors and experts leave Iran, and under the regime’s policies, Iran ranks first in the world in terms of skills shortage.

According to  Anoushirvan Mohseni-Bandpei, a former member of the regime’s MPs, “This is one of Iran’s serious problems currently. We are facing the devaluation of the national currency. Thus, despite reaching (top academic) the elite after 20 years of experience, their income is less than $1,000. Yet, our neighboring countries offer between $10,000 and $15,000 to faculty members of universities and elites.”

Chancellor for Finance of the University of Mashhad said in an interview with the semi-official ISNA news agency on 25 January, “lack of support for faculty members has led to an increase in brain drain and migration of professors from all universities. Some departments in the country’s universities, such as mechanics and computers, have lost more than 30% of their professors, which is very dangerous.”

University professors and other specialists in Iran are facing a situation in which the doors of Western universities are open to them owing to livelihood, political, and social pressures. As a result, their retreat from Iran plays right into the hands of those countries at the expense of the Iranian people.

“Countries with the largest Iranian population (people born in Iran) are the United Arab Emirates, the United States, Canada, Germany, the United Kingdom, Turkey, Sweden, Australia, Kuwait, the Netherlands, Qatar, France, Norway, Austria, Denmark, Italy, Iraq, Switzerland, and Belgium. Statistics for 2019 show that a total of 1,301,975 Iranians have migrated to these countries, while in 1990 the number of Iranians migrating worldwide was 631,339. Global statistics also show that the majority of Iranian migrants are educated and experts. This figure has doubled from 2011 to 2020, when in recent years, due to economic problems, there is massive brain drain,” wrote the state-run Khabar Fouri website in a piece on 21 January.

The regime’s intervention in professors’ teaching is another form of oppression.

Through inappropriate and unprofessional intervention, uneducated regime officials or affiliates of the university administration disrupt the work of independent academics. Many who remark on professors’ performance either lack scientific expertise or, if they do, use different criteria to judge the academics. As a consequence, this intervention is the major cause of the academics’ migration from the nation.

Their emigration not only leads to a lack of several skilled and specialized personnel, but it also has an effect on the country’s financial resources, which are used to prepare this trained workforce. This misspent fund is worth tens of millions of dollars in damages, which is a significant annual loss for the nation.