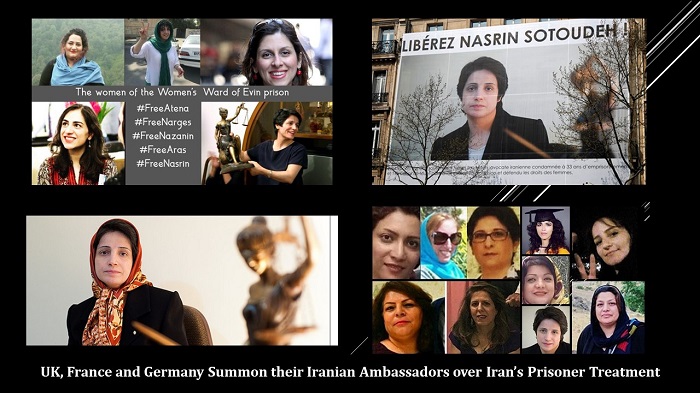 In an article for the U.K. Guardian, reporter Patrick Wintour said that France, Germany, and the UK are now summoning Iranian ambassadors as a joint diplomatic protest against the detention of dual nationals within Iran and the harsh treatment of its political prisoners.

The Iranian ambassador to Britain was called on Tuesday to meet senior officials from the Foreign Office. Paris and Berlin are expected to respond in a similar way this week. A letter viewed by the Guardian that was given to Hamid Baeidinejad states that Iran is losing its reputation in the international community by the way it is arbitrarily detaining people.

What got these countries into action was the fear that further human rights abuses were soon likely to take place and the target is expected to be dual nationals who are currently being detained. The rumor is that Nazanin Zaghari-Ratcliffe, a British-Iranian dual national, who was imprisoned in 2016 but is now under house arrest at her parent’s home, was about to have further charges leveled at her. The family has suggested a recent visit by members of the IGRC was aimed at intimidating them.

#Iran under mullahs
“It is absolutely shocking that Nasrin Sotoudeh is facing nearly four decades in jail and 148 lashes for her peaceful #humanrights work, including her defense of women protesting against Iran’s degrading #forcedhijab (veiling) laws." – @amnesty pic.twitter.com/RSM8dYQKuT

There are other events that have unfolded recently, including the execution of a political prisoner, Navid Afkari, and the 40 plus days of hunger strike currently being carried out by Nasrin Sotoudeh. She is a lawyer and her biggest concern has been defending the rights of women to not to have to wear the hijab. The main reasons for her hunger strike were to highlight the terrible conditions that people have to endure because of Covid-19 (More than 108,800 people in Iran have died from Covid-19, according to a report by the People’s Mojahedin Organization of Iran (PMOI / MEK Iran).)

)and also the demand to set free political prisoners. France at the same time is trying to get Fariba Adelkah released. She is a well-respected French-Iranian academic who was arrested in 2018. She was in Evin prison, but she has recently been transferred to a Ministry of Intelligence detention center.

It has also been revealed that the Iranian diplomat, Hamid Baeidinejad, has received a letter explaining Britain’s concern about the severity of human rights abuses taking place in Iran. The letter states that British citizens, including dual nationals, are unjustifiably suffering harsh conditions in Iranian prisons. The letter considers these people to have ‘’been arbitrarily detained’’ and should be returned to their families. A third feature of the letter concern over the needless, ongoing persecution of Iranians who are simply defending human rights within their own country.

The three countries (E3) have alluded to the execution of Afkari and say that people should have the right to express their opinions without being intimidated. What has happened instead is that many protesters have lost their lives for what they believe.

They also say: “A free and independent media is essential to a functioning society. Cultural organizations, that connect people across borders, benefit all our peoples.”

So far, no warning has been issued to Iran of possible consequences if the human rights abuses persist including any likelihood of the three countries withdrawing support for Iran’s 2015 nuclear deal.  The US no longer supports this deal and it, therefore, believes it has the right to implement UN sanctions, including a continuation of the embargo on conventional arms sales to Iran. The E3 is insistent that the US does not have the legal power to follow through these actions.

Javad Zarif, Iran’s foreign minister, canceled a planned visit last week to Europe last week allegedly on the grounds of the necessary quarantining due to the Covid-19 pandemic. However, it has been revealed that it was the German ministry of foreign affairs that canceled it and that this could be something to do with Afkari’s execution of Navid Afkari, even though this has not been actually confirmed as yet.

Zarif says he has no intention of releasing any prisoners unless there are further negotiations regarding prisoners being swapped.

The Iranian government has recently been challenged over political prisoners being allowed to stand trial with a jury present in a public court because at the moment they are tried usually in front of a judge in a type of revolutionary court, which was founded following the 1979 revolution to try anyone who was suspected of committing certain crimes, like trying to overthrow the government and committing blasphemy.

The Women’s Committee of the National Council of Resistance of Iran’s Elham Zanjani had a piece published on International Policy Digest entitled, ‘The Two Faces of Iran’. The piece, published on Sunday, January 20th, charts the story of British-Iranian, Nazanin Zaghai-Ratcliffe, who is in regime custody in Iran.