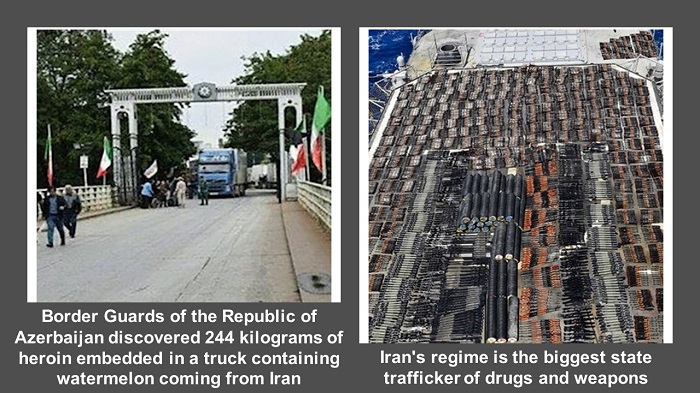 Using the country’s resources and the wealth it steals from the people, the regime has established an international smuggling system for weapons and narcotics trafficking, according to the reports of the National Council of Resistance of Iran (NCRI), and the People’s Mujahedin of Iran (PMOI / MEK Iran). Major parties under the control of Iranian regime supreme leader Ali Khamenei have dedicated a portion of their time to controlling the smuggling network in this system.

In truth, Khamenei’s regional initiatives are mostly financed by the money his dictatorship receives from narcotics trafficking. It also uses the same weapons and explosives network to help regime-controlled proxy organizations.

This network is run by the Islamic Revolutionary Guard Corps (IRGC) and the terrorist Quds Force. The network is in charge of handling and transporting drugs to Europe and America.

According to a report published by WikiLeaks from the US Embassy in Baku, Azerbaijan, the Iranian dictatorship is the world’s largest drug trafficker.

The Times disclosed the Revolutionary Guards’ complicity in drug trafficking in Iran and overseas in a report published on 17 November 2011.

According to former regime officials, members of Iran’s Revolutionary Guard Corps (IRGC) have taken control of drug trafficking across the Islamic Republic, exploiting the multibillion-pound trade to create linkages with a global crime network and achieve its goal of undermining the West.

The US Treasury Department designated Brigadier General Gholamreza Baghbani, one of the Quds Force’s senior leaders, as a narcotics trafficker in March 2010 and issued an arrest warrant for him.

Evidence reveals that Gholamreza Baghbani assisted Afghan drug traffickers to carry drugs into European countries via Iran, according to a US Treasury Department statement. In turn, he utilized them to provide Taliban soldiers in Afghanistan with guns and ammunition.

The dictatorship uses its network to supply guns and ammunition to its proxy groups in Arab nations such as Yemen, Lebanon, Iraq, and Syria, in addition to narcotics trafficking.

According to the Yemeni source, the Iranian regime opposes peace efforts in Yemen.

Off the coast of Somalia, the US Navy apprehended two ships transporting a significant weapons shipment bound for Yemen on 18 February.

The weapons were discovered and recovered in the Indian Ocean, according to the US Navy, which included thousands of Kalashnikov rifles, light machine guns, heavy sniper rifles, rocket launchers, and more.

These are only examples reported in the recent three months, and they represent a minor percentage of the smuggling carried out by the Iranian regime in the region.

However, they give a clear picture of the regime’s massive illegal activities, which have made it the world’s largest smuggler of death and destruction.