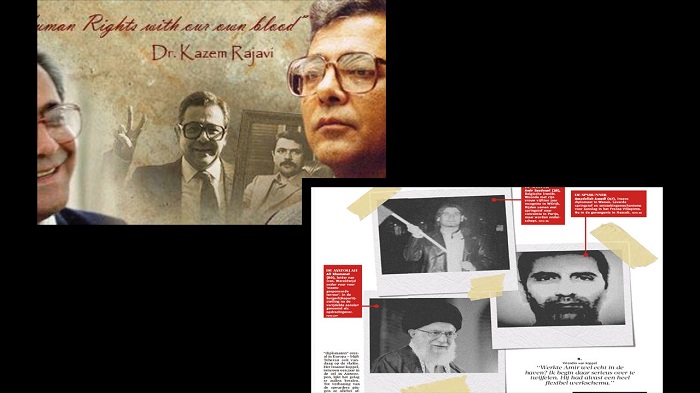 On 24th April 1990, Dr. Kazem Rajavi was shot and killed near his home just outside Geneva, Switzerland. Professor Rajavi, the brother of Massoud Rajavi, the leader of the Resistance, was the representative in Switzerland for the National Council of Resistance of Iran (NCRI).

He worked tirelessly and relentlessly on human rights, equality, and freedom in Iran. He was gunned down by operatives of the Iranian regime. The NCRI established that several high ranking officials were involved in his assassination.

The Iranian regime has been carrying out such assassinations for decades, killing political opponents and using it as a tool to silence others.

Swiss authorities issued an order for the arrest of Ali Fallahian in March 2006. The judge involved with the case established that Fallahian played a significant role in the assassination of Professor Rajavi. At that time, Fallahian was the Iranian regime’s Intelligence Minister.

Prof. Kazem Rajavi’s terror in Switzerland has raised a lot of concerns among the Iranian communities and supporters of the Mujahedin-e Khalq (#PMOI #MEK #Iran).https://t.co/gy5xQeqBkp #IRGCTerrorWithoutBorders #Iranian #coronavirus @USAdarFarsi pic.twitter.com/O2RTBb1hGw

The investigators working on the case reported that there was meticulous planning put into the assassination and that commando teams traveled to Geneva to make preparations. Furthermore, those involved in the assassination were issued with Iranian service passports bearing the mention “on a mission”.

The (PMOI / MEK Iran) also looked into the assassination and was able to establish that some of the highest-ranking officials were aware of and involved in the planning of the assassination. These include Supreme Leader Ali Khamenei, Ali Akbar Velayati – the Foreign Minister at that time, and Hassan Rouhani who was the Supreme Leader’s representative on the regime’s Supreme National Security Council at that time.

The NCRI was recently informed that the file regarding Professor Rajavi’s assassination will be closed due to the statute of limitations. This has been disappointing news given the overwhelming evidence of state-sponsored murder.

EDITORIAL: Swiss Send Wrong Message to Iran
The #Swiss government and the entire international community must commit to bringing #Iran’s #HumanRights abusers to justice, lest the regime becomes emboldened to carry out more atrocities.https://t.co/W66KCNSMbB

The British Committee for Iran Freedom (BCFIF), lawmakers from the House of Commons and the House of Lords in the United Kingdom, have criticized the decision made by the Swiss authorities. They join the International Committee in Search of Justice (ISJ), an organization with the support of thousands of Parliamentarians on both sides of the Atlantic, in calling for the case to remain open.

In a statement, the BCFIF said that the decision to close the case of the assassination of “one of the most prominent human rights advocates” is “shocking”. They described the decision to close the file as a violation of both democratic values and human rights and warned that it will embolden the regime by sending a message that it will not be held responsible for its actions.

They also pointed out that crimes against humanity and terrorism “are not subject to the statute of limitations, particularly in the case of a regime in which one ambassador and six diplomats have been expelled for participating in assassination attempts against members supporters of the People’s Mojahedin Organization of Iran’s (PMOI / MEK Iran).

in the past two years alone, and another diplomat has been in jail in Belgium for nearly two years for his criminal plot to bomb a large gathering of Iranians in Paris on June 30, 2018”.

The BCFIF calls on the Swiss authorities to continue working on this case to pursue justice.