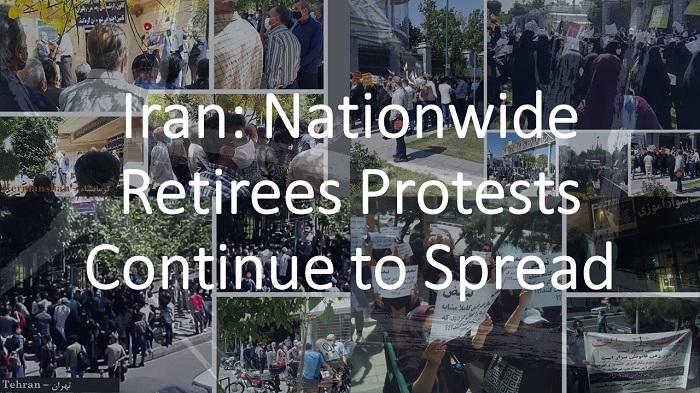 The National Council of Resistance of Iran (NCRI), and the People’s Mujahedin of Iran (PMOI / MEK Iran), reported that in the face of an increasing wave of authoritarian measures by the Iranian government, retirees and pensioners from the Social Security Institution took to the streets and marched on Sunday.

“We will not rest until we get our rights,” the crowd chanted, voicing their frustration with an administration that has failed to keep its promises to solve the economic issues that have troubled many communities in recent years.

The political essence of the demands has marked a dramatic turn in the protests. Rallies in the past often reflected on high inflation rates and prices, as well as low pensions. However, since the beginning of April, the rally chants have become more political, with demonstrators calling for an election boycott.

Pensioners have expanded into a national movement in recent months that is spreading to even more cities. With each passing week of these pre-announced protests, the number of people attending these rallies grows.

The collapse of Iran’s economy, fuelled by government corruption and disastrous policies, has left many pensioners and retired government employees struggling to bring food to their tables. The rial, Iran’s national currency, has plummeted in value in recent years, losing more than 80% of its value. The price of basic commodities has risen as a result of this. In the meantime, pensions and wages have not been changed to reflect this profound change in socio-economic dynamics.

Iran has 18 million retirees, according to a survey taken in 2020. These people are among Iran’s impoverished masses, who make up 96 percent of the country’s population and live in poverty. According to the regime’s own figures, more than 75% of retirees are unable to meet their basic needs.

Pensioners earn an average of 25 million rials per month, despite the fact that the poverty line in some areas of Iran has risen to 100 million rials in the last year. Workers, like pensioners, are suffering the consequences of the regime’s destructive policies and failure to raise the minimum wage in line with inflation and price increases.

The Iranian regime has recently taken steps to further deprive employees and retirees of their most fundamental privileges. According to a 13 May study by the state-run ILNA, the Majlis (parliament) is considering legislation that would base pensions on the average of workers’ earnings over the previous 20 years.

Pensions are currently calculated based on wages earned in the last two years of a worker’s working career. Given rising inflation and the weakening of the national currency, the 20-year average wage would not be sufficient to meet workers’ most basic needs until they retire.

Retirees and pensioners have remained adamant in their campaigns, unfazed by the regime’s intimidation and aware that they will not be able to obtain their rights any other way.

The government is afraid of these and other opposition movements because they are well-organized. To avoid the spread of opposition, senior regime leaders, including the supreme leader Ali Khamenei, has called for a crackdown on social media networks. However, ongoing demonstrations demonstrate the futility of their actions.