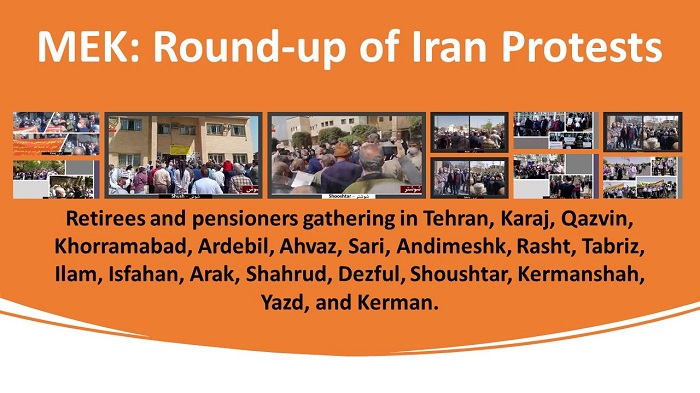 As Iran’s socio-economic crisis worsen, more demonstrations are held across the nation, according to reports tallied by The National Council of Resistance of Iran (NCRI), and the People’s Mujahedin of Iran (PMOI / MEK Iran).

On 8 May, high schoolers protested in-person tests in Tehran’s Nasim Shahr district, as the Covid-19 outbreak continues to claim up to a thousand lives per day in Iran.

Due to the Coronavirus pandemic, Iranian students began protesting in a number of cities across the country on Tuesday against taking in-person exams rather than online exams.

The National Council of Resistance of Iran (NCRI), and the People’s Mujahedin of Iran (PMOI / MEK Iran), reported that the coronavirus death toll in 541 cities surpasses 282,900.

According to the Iranian Resistance, the regime’s suppressive forces assaulted students with batons and pepper spray on Wednesday in many towns, confiscating their mobile devices. Several students were detained in Yazd and Shahrekord.

While other countries are fulfilling their target of universal vaccination, the government has postponed vaccination and refused to implement lockdown. Meanwhile, the coronavirus pandemic is in its fourth wave in Iran. The regime’s cruel and barbaric Covid-19 strategy to govern the restive population includes holding examinations, refusing to obtain approved vaccinations, and forcing citizens to work.

However, the regime’s agenda has so far failed, as shown by the ongoing protests in Iran.

On Saturday, the plundering owners of Azovico protested in front of the Special Court for Economic Corruption in Tehran. On Saturday, plundered investors of the mass housing company “Anboh Sazan Maskan” staged a protest in front of Urmia Municipality, demanding their rights and homes.

Several poultry farmers in Shiraz, central Iran, staged a protest on Thursday to claim their rights.

The plunderers of the stock exchange staged a protest rally in Tehran on Thursday morning. The regime’s repressive forces targeted them, arresting two people, fearing that the protest would spread.

Due to the regime’s scheme of compensating its budget deficit by deceiving citizens and enabling them to invest in the stock market, millions of Iranians have lost their life savings in stock market crises.

Although admitting to the regime’s exploitation, embezzlement, and economic instability, the state-run Sharq daily warned the regime of social repercussions as millions of Iranians struggle with extreme poverty.

“Policies of liberalization, privatization, deregulation, monetization, and commodification of social and economic phenomena are responsible for the country’s current economic, social, cultural, and political crises after the war.”

“The contribution of the devaluation of the national currency as the most important macroeconomic destabilization, stagflation, widespread unemployment, unprecedented socio-economic inequalities; officials’ astronomical wealth; Unprecedented corruption in the administrative, cultural and social context; Continuous weakening of the purchasing power of the people and the livelihood crisis of a large population of society; Social harms including the spread of opium addiction; The growth of crime; Violence and suicide rate, and prostitution, the rising number of labor children, brain drain are threats to the socio-political security,” read the piece published by Sharq.