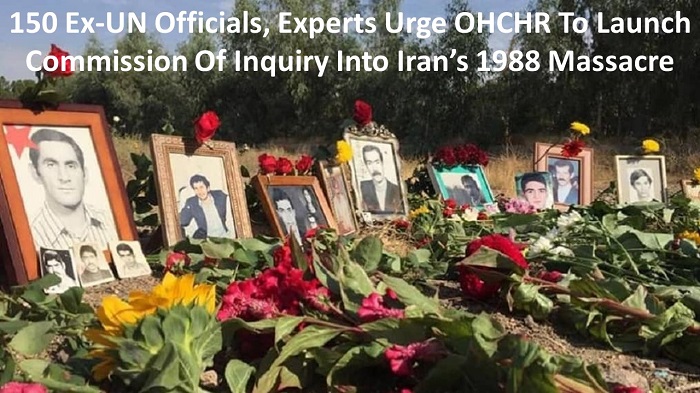 The organization Justice for the Victims of the 1988 Massacre in Iran, has released statements bearing the signatures of more than 150 law and human rights experts, including 45 former UN officials. The statement reiterates the call to action by critics of the regime and the People’s Mojahedin Organization of Iran (PMOI / MEK Iran). The need for international pressure is emphasized to disrupts the “systematic impunity” that has cloaked the issue for decades.

“Many of the officials involved [in the killings] continue to hold positions of power,” says the statement. This refers to the Iranian Minister of Justice and the head of the national judiciary. The latter, Ebrahim Raisi was appointed by the regime’s Supreme Leader Ali Khamenei, and he now oversees the response to protests and dissent, includes widespread criticism of the 1988 massacre.

In 2016 an audio recording contemporary to the massacre was leaked in which several lading perpetrators confirmed shocking details, outlining the inclusion of teenagers and pregnant women among the victims.

Since then, the long-enforced silence on the issue broke a little as the issue gained a higher public profile. This prompted then-justice minister Mostafa Pourmohammadi to defend his own role in the “death commissions”, saying he was following “god’s command” by executing members of the MEK.

The MEK as the most significant challenge to the theocratic regime was the main focus of the fatwa declared dissenters guilty of “enmity against God” and deserving of execution. Death commissions were Tehran established in prisons and within months, they were responsible for an estimated 30,000 murders.

Prior to 2016, exiled MEK activities have been consistently appealing to the international community since 1988. Initial appeals were largely dismissed however as Western policymakers’ priorities lent towards maintaining relations with the regime in favor of promoting “moderate” voices from within it. This has been criticized as it relies on an overestimate of factional differences. The 1988 massacres legacy is a prime example of the broad alignment of Iranian officials against protests.

Rouhani consistently appoints perpetrators of the 1988 massacre, such as Alireza Avaie who replaces supposed ‘moderate’ Pourmohammahi. Such actions have exacerbated called for the perpetrators of the killings to be held accountable so they cannot be elevated figures who can promote human rights abuse.

As the statement concludes it says, “We appeal to the UN Human Rights Council to end the culture of impunity that exists in Iran by establishing a Commission of Inquiry into the 1988 mass extrajudicial executions and forced disappearances.”

A comparative letter sent to Iranian authorities by seven UN human rights experts in September 2020 was embraced by Amnesty International as a “momentous breakthrough” for international relations with Iran.

Speaking to the previous oversight it says, “the situation was not referred to the Security Council, the UN General Assembly did not follow up on the resolution and the UN Commission on Human Rights did not take any action.”

The consistent inaction makes the current call for action all the more important as the regime tried to destroy mass graves of the Martyrs to conceal evidence.

Opportunities for holding people accountable are diminishing and the president-elect of the NCRI, Maryam Rajavi, responded by demanding that the UN Secretary-General, the UN Human Rights Council, the UN Security Council and the UN High Commissioner for Human Rights forcefully condemn this ongoing practice, so that unfettered investigation can be established.

This could finally secure a real figure of the number of dissidents that were killed in 1988, who they were and where they are buried.