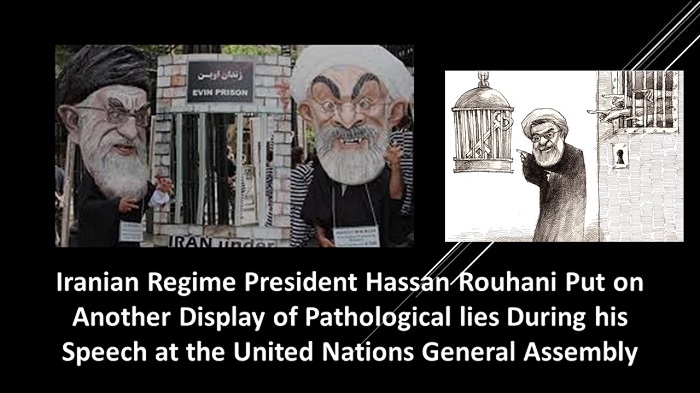 Iranian President Hassan Rouhani spoke at the UN General Assembly session on Tuesday 22nd September. His speech was certainly memorable. Not in the sense that it was a good speech, but because it was full of lies and remarks that can only be described as crazy.

His speech was quite humorous because he described Iran – the number one state sponsor of terrorism in the world – as “the axis of peace and stability”. But does President Rouhani really believe this rubbish? Surely not.

Iranian regime president Hassan Rouhani put on another display of pathological lies during his speech at the United Nations General Assembly on Tuesday.#Iranhttps://t.co/3G7VxU8k2p

President Rouhani is the Supreme Leader’s puppet. He does not have the authority many leaders in other countries are afforded because he is simply acting on the wishes of Supreme Leader Ali Khamenei.

As the Iranian regime always does when it has serious issues to address or when it faces problems (of its own doing), officials point their fingers to everyone and anyone.

In his speech at the United Nations General Assembly, President Rouhani talked about the importance and necessity of giving our children “a better and safer world based on the rule of law”. This is ironic given than the Iranian regime extrajudicially killed more than 30,000 political prisoners most of them members or supporters of The People’s Mojahedin Organization of Iran (PMOI / MEK Iran), back in 1988 – an atrocity that the regime still defends. It is also ironic that President Rouhani talks about a safer world for children when Iran continues to execute juvenile offenders.

#Iran: Rouhani’s blatant lies at the #UNGA #Iranian regime president Hassan Rouhani put on another display of pathological lies during his speech at the United Nations General Assembly on Tuesday.#NoImpunity4Mullahs https://t.co/5bp00aIgQK

Rouhani also described Iran as the “champion of the fight against occupation and extremism”. Religious tolerance is unheard of with the regime. It still persecutes ethnic and religious minorities. It specifically targets them, arrests them, and throws them in jail. One of the pillars of the regime’s existence is extremism.

Less than a year ago, the regime killed 1,500 protesters, injured thousands of protesters, and arrested thousands of more protesters. Reuters confirmed in a special report on December 23, 2019, about the deadly crackdown on November 2019 nationwide protests in Iran the death toll of 1500 that was announced by the People’s Mojahedin Organization of Iran (PMOI / MEK Iran) on December 15, 2019.

Iranian regime president Hassan Rouhani put on another display of pathological lies during his #UNGA speech.
-"Political freedom at home is very important to us"
-"we are proud of our democracy"
and more…#Hypocrisyhttps://t.co/ovaAs1VbIw

MEK reported many times the Iranian regime’s meddling in Iraq through proxy groups and corrupt political figures. Iran’s involvement in Iraq is extensive, and the People’s Mojahedin Organization of Iran (PMOI / MEK Iran) has obtained information confirming that the notorious Islamic Revolutionary Guards Corps (IRGC) and its Quds Force are in control of the regime’s consulates and embassies in Karbala, Najaf, Basra, and Baghdad.

Demonstrators in the cities of Najaf and Babil, both located in southern #Iraq, are protesting against poverty, economic corruption, and the Iranian regime’s meddling in their country through proxy groups and corrupt political figures.#Iranhttps://t.co/3nZQPmm2Vm

Rouhani also said that the regime supported and stood behind the people of Syria. What a disrespectful comment. Iran’s meddling abroad has sparked humanitarian crises. The bloodshed that Iran is responsible for in Syria is unspeakable. Iran’s meddling prolonged a war that would have barely made it off the ground had it not been involved. Just seconds later, Rouhani spoke about Iran’s assassinated hero – Qassem Soleimani. Suleimani himself admitted that he “controls Iran’s politics and agenda in Iraq, Lebanon, Qaza and Afghanistan”. Iranian Ambassador to Iraq is a member of the Quds Force as well as a person that is supposed to replace him. This man has been accurately described as Iran’s top terrorist. The name says it all.

Mrs. Maryam Rajavi the President-elect of the National Council of Resistance of Iran’s (NCRI): Hundreds of missile and rocket attacks, hostage-taking, car bombs, explosions of civilian buses and cars, and other terrorist operations in the years following the invasion of Iraq were organized and carried out by the terrorist IRGC Quds Force commanded by QassemSoleimani.

Rouhani and every other official in Iran can tell whatever lies they want, but the truth will always prevail. Another uprising is on the horizon. With every uprising that takes place in Iran, more and more international attention is drawn to the events in the country. The people’s desire to see the regime fall is evident and their reasons are completely legitimate.

The US ambassador to the United Nations, Kelly Kraft, called Rouhani’s speech a ‘masterpiece of lies’ and called the ruling regime ‘the biggest supporter of terrorism in the world.’