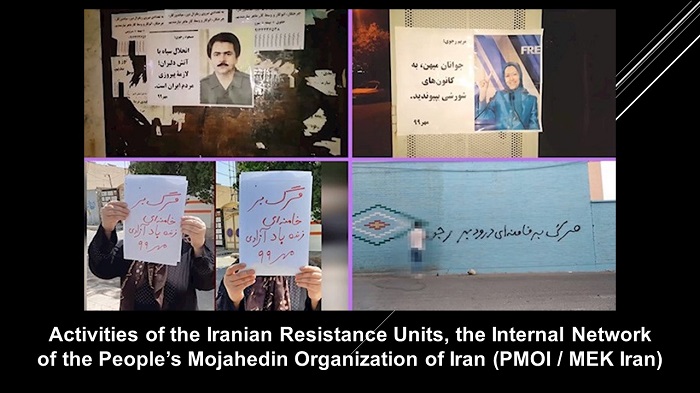 Society in Iran is restless. There has been crisis after crisis over the past few years and the regime’s management of them – or mismanagement is perhaps the more accurate description – is shocking. The economy is in tatters and more and more people are falling into absolute poverty in the country.

Furthermore, the Coronavirus pandemic has caused a lot of problems, – some of these are economic, but it has also brought a lot of political and social problems to the forefront. Over 126,300 people have died of the coronavirus in Iran, according to reports by the Iranian opposition People’s Mojahedin Organization of Iran (PMOI / MEK Iran).

More than 126,300 people have died of the novel #coronavirus in 458 cities checkered across all of Iran's 31 provinces, according to the Iranian opposition PMOI/MEK.

Experiencing the instability at a time of crisis has angered the people and they are determined to make their voices heard.

The People’s Mojahedin Organization of Iran (PMOI / MEK Iran), has an internal network of Resistance Units that have been working hard to amplify the voice and the wishes of the people. Over the past few days, the MEK Resistance Units have organized a massive anti-regime campaign calling for the overthrow of the regime.

The People’s Mojahedin Organization of Iran (#PMOI #MEK #Iran), supporters went about writing slogans that rejected the dictatorships of both the Shah and Khamenei and called for the criminal IRGC to be disbanded. pic.twitter.com/qMVw7aiQAg

They bravely took to the streets despite the regime’s increasing suppression and they spread messages of support for Resistance leader Massoud Rajavi and President-elect of the National Council of Resistance of Iran (NCRI) Maryam Rajavi.

The MEK Resistance Units commemorated the many martyrs of the protests that took place in November last year. More than 1,500 people were killed as a result of the regime’s brutality and their lives were remembered by the Resistance Units in the run-up to the first anniversary.

Recently, Iranians learned of the death of Mohammad Reza Shajarian, a popular, well-loved, and revolutionary Iranian artist. The people were prevented by the regime from attending his funeral and the MEK Resistance Units spread messages about how the people feel about this. For example: “The regime prevents people from going to Shajarian’s funeral to remember his eternal sound, but we will commemorate him face to face with the dictator” and “Dictators will die, but Shajarian will live forever.”

Tehran – Activities of the supporters of the #MEK following the passing of #Iran’s national artist: “Massoud Rajavi: In memory of Shajarian, who will always remain in our memories… We will always remember his most moving message, ‘death to the dictator’https://t.co/IYw9kUaHkL

Young people across the country have also been taking to the street. Defiant young people torched the entrance of the Guardian Council in the city of Mashhad. It is one of the regime’s many repressive centers that control the suppression of the opposition and the elimination of rivals.

Young people in Khaf and Mobarakeh torched images of Supreme Leader Ali Khamenei and the now-deceased Qassem Soleimani (the regime’s top terrorist as he has been described).

The regime is in a very delicate position because it knows that the people are angry and that another nationwide uprising is on the horizon. With every uprising that takes place, the regime gets weaker and weaker, and coupled with the international pressure it is under, collapse is getting closer and closer.

The regime is increasing its suppression of the people, but this is having the opposite effect than that intended. Instead of silencing the people and instilling fear in society, the regime’s increased repression is only making them more determined to see the regime fall.

#Tehran Police Chief, #Hossein_Rahimi, threatens social media activists: “the police force acted with judicial authority and not on its own.”"We will deal forcefully with those who organise campaigns and invite people to public gatherings on social media." https://t.co/4rAC8LpVCl